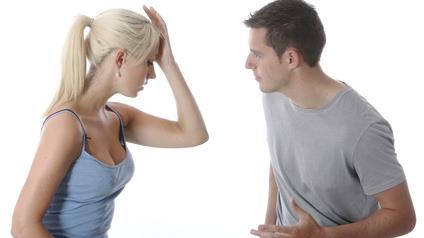 What is the number one predictor of divorce? Contempt. Irritability at your partner. Disgust. Derision. When you blow off your partner. Or even jokingly put someone down, even in jest.

John Gottman, who wrote Why Marriages Succeed or Fail after studying 2000 married couples over two decades, found that contempt, criticism, and defensiveness ultimately lead to divorce. And, further, couples who made faces (like eye rolling or sneering) when their partner was speaking were likely to be separated within four years.

This was all too true in my own marriage. Once I had developed contempt for my husband, we were on borrowed time. It happened subtly. And it took me time to realize that, wow, I wasn’t just sometimes annoyed with my husband, he disgusted me thoroughly and completely.

Rob and I married one summer and within months, his personality changed in bizarre ways. At the time, I had no idea why or how. But in hindsight, the signs were all there. Initially, he was “high” on a new relationship. He was a happy drunk (though I didn’t realize he was a drunk at all), excited, outgoing and full of energy. He was fun. When we married and shared a home (and he actually had some responsibilities attached to that, like helping to clean and walk dogs), he became a mean drunk, explosive and evil (unless we were getting ready to go on vacation, in which case he was a happy drunk again). He would scream, jump up and down, and slam his fists into tables. It was truly frightening and strange.

One day, I went to our marriage therapy session. I showed up alone because, true to form, after my husband had a big drinking binge, he stayed far away. After telling our therapist how I honestly felt about my husband—that I mostly hated him, didn’t trust him, his touch made my skin crawl, and I determined that he was uninteresting and dumb – she told me that our marriage was doomed.

“Once contempt has entered the picture, it’s basically un-fixable,” she said.

When did this all start, I wondered. I pin-pointed it back to about five months into the marriage when Rob, his mother, and I were walking from the parking lot to a Charger’s football game. I was joking around about how badly marriage sucked and why would anyone put themselves in such a miserable environment on purpose. Hahahaha. She said that she was really uncomfortable with the bantering. It struck me that she was right. I mean, who jokes about that (especially in front of your husband’s mother)?

I started to increasingly realize that I was rolling my eyes when he spoke, not kissing him during make-up sex (too intimate, I’d say), and even saying awful things to him, sometimes jokingly (“You’re so funny, you can’t even manage a coherent thought!) and sometimes horribly bold (“How’s that beer working for you? Have you looked at yourself in the mirror lately? You are a mess.). Truth was, as I thought about it deeper, I was striking back at his abusive behavior in a very passive-aggressive way. If he could scream at me, I could say incredibly mean, below-the-belt things back. I was desperate, somewhat in denial myself, and not ready yet to say out loud how I really felt: I wanted out. I wasn’t in love. I didn’t even want him to touch me much of the time.

One night we were having sex and I was mouthing the words “I hate you.” He couldn’t see me but it was my way of taking my power back. A great method of communication? Of course not. It was all so unhealthy and ridiculous and awful.

A friend once asked me what could I have done to erase the contempt and develop compassion and understanding for this man who was clearly sick with alcoholism? I thought about it for a very long time. Go with him to AA? Check (I tried that, it failed miserably). Threaten to leave him if he didn’t get well? I tried that too. Try to be kinder and nicer? Check and fail.

I looked up how to fix contempt and it made me furious. They recommended focusing on the person’s positive aspects. Say nice things. Be more affectionate. Write a list of why you fell in love in the first place. Yadayadayada. Are you kidding me? Sure, after you develop disgust for your husband, give him a hug and make a happy list. That will fix everything (said with dripping sarcasm). What world do these people live in, I wanted to scream? I remember once hearing from a religious leader who said that couples in this stage needed to pray together. Hmmm, not in my case. I mean, I’m a big fan of praying but we (I) was well beyond that as a fixable solution.

Here’s the reality, my dear readers: If you feel true contempt for your partner, your relationship is truly over. Or if it isn’t, it should be. Because you are in one permanently horrible relationship. And you have to ask yourself if that is benefitting you, him or your children. Because unhealthy relationships leave all kinds of broken lives, souls and hearts in their wake that can have permanently damaging impact.

Once you are in the throws of contempt, it is time to cut your losses, get therapy, and move forward to something better and healthier for everyone.