Sorry for not updating the blog but I’ve been busy!

The wedding was 9 days ago, on the 11th. It was very stressful but good, I think.

I can’t really remember, it is a blur. Like this…

It all started on the Sunday before, a few days before people were scheduled to arrive.

I had a friend en route, driving with her son from Oklahoma. Al and I were out with the kids doing errands on Sunday afternoon, when I got a text that a family member had died. This was actually the husband of my cousin and he was 44 years old. It was nothing short of a tragedy. Awful, shocking, and horrible. Plus terrible timing because my mom’s family was due to arrive here on Thursday and instead had to go and be with my cousin, of course. I would have been there too had it not been for all the people scheduled to arrive at my house within a few hours and days. A dear friend of mine was having a party for us that evening and I felt like I had to go, couldn’t cancel on her after she had worked so hard.

Party photo. See how hard she worked? She MADE that cake and did the flowers herself. So, after much discussion with my family and cousin, it was decided that I would NOT try to go to the funeral and visitation because of events happening here but I was very conflicted about it because my cousin and I are very close.  Like text daily close.

My BFF from Oklahoma was here staying at my house and helping me run last minute errands, helping with the kids and trying to help me keep my head together. Not an easy job. We had ordered flowers from Sams Club in bulk which worked out great. They were delivered on Tuesday and we had to strip the leaves and cut them at a 45 degree angle and get them in buckets and refrigerated for a 24 hour period before they could be placed in arrangements on Wednesday for the wedding on Thursday. We managed and then on Tuesday evening Al’s 3 family members from the UK arrived.

Wednesday morning we got up and started frantically working on the flowers. We had a big day. I had to have my nails done, pick up rentals for the luncheon, pick up the Prosecco, do the flowers and deliver it all to the restaurant for lunch the next day. The flowers were gorgeous if I do say so myself. (My friend who gave us the party, also did the flowers and our photos which are beautiful. She needs a damn business.) I was with some friends at the nail salon when my Mom sent a text that she and my dad were at the ER.

Shit, fuck and damn, what else could go wrong? Not my nails, they looked great. Ha! Well, Dad had a kidney stone that wouldn’t pass. I had no idea what to do. Al’s family had all arrived and my parents didn’t want us to delay or change anything. I held out hope that maybe he could come and sit in a recliner if we moved it from the church to my living room. So, on Wednesday evening, I pulled the trigger on the church and we started setting up my living room for the wedding. Al’s family was all in the kitchen having arrived from about 5 states, plus the UK. They were drinking and laughing and my BFF and I were hauling chairs and putting lights on the Ficas tree in the corner. It looked pretty good if I do say so myself.

Al’s kids stayed here on Wednesday night and the girls and I got up early Thursday for our appointments at the hair salon. There I learned that Dad was unable to come, too sick, too many pain pills. Aargh. One of my brothers stayed with him so my mom could come since he could NOT be left alone.

I was disappointed and tearful that he couldn’t be there but my hair looked great. Al and I had a ‘first look’ and both teared up. He was tearful most of the morning but I was doing great. I think I had steeled myself for whatever tragedy was due next since we had the tragic death and then Dad and my brother couldn’t attend.  We had decided to write our own vows, and I had written mine at 12:30 a.m. the nightbefore on my iPhone. The Boy walked me down the aisle (or round the corner to the LR), Jumping Bean held Al’s ring, and Merlot carried my iphone and handed it to me to read my vows…  where, I lost it. Both of us were crying messes trying to talk and boo hooing at the same time. At some point some kind soul passed me a Kleenex.

So much for composure.

Then we had kisses. 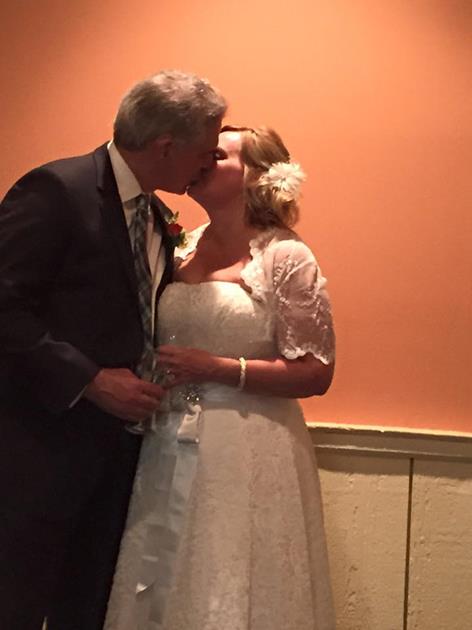 Dad felt better by Saturday night (but not perfect by far) and was able to attend our small reception. Unbelievably, my cousin and my family members that had gone to support her also managed to come up on Friday after the funeral. My cousin needed to get out of town for a bit with her daughter and although very sad, we did have some quality time together, mourning and then celebrating, mourning and celebrating. There was dancing and kissing and drinking.  All 6 kids were there which is another story in itself but it went really well.

Many more wedding tales to come,