I tossed good taste to the wind a couple of weeks ago when I applied for a Google AdSense account for my OpenSalon blog. I will admit I’m an aesthetic snob. I like things to look a certain way. I pay top dollar on Kleenex, the high-end oval-shaped kind with the groovy mod prints that hold only a dozen tissues. I arrange the bed pillows–soothing blues and greens, coverings that offer a variety of tactile experiences–just so. I even bought a lovely four-leaf-clover-shaped caddy to house our remote controls so they don’t spill out on to the couch and make me yell at people.

Until recently, I looked askance at bloggers who allowed those garish blue boxes on the margins of their sites. How gauche to pimp potentially unreliable businesses! How cheesy to pander for click-throughs! Does this mean you personally vouch for the 7 Sure Fire Ways to Save Your Marriage! ? How do you know Birth Records Can Be Found for Anyone! ? Have you vetted the Proven Advanced Drug-Free Treatment for Bipolar Disorder!? I was not above running ads for reputable vendors on my blog, per se, but only with nuanced ad copy and pretty fonts.

And then I met with my custody evaluator. On our first session, he riffled through pages and pages and pages of notes he’d taken from my ex’s first visit. “Wow,” he said, slightly bug-eyed. “Prince has a lot of allegations.”

At the evaluator’s $350-an-hour rate, Prince’s copious allegations of my unfit motherhood and all-around craziness could bleed me dry. Which of course is part of his intention. I’d heard of custody evaluations that ran upwards of $25,000 and thought…this is how it happens. The richer, more rabid ex slings mud until the poorer, more reasonable ex cries uncle. I started to hyperventilate. Not really, but I find that I don’t actually breathe anymore. I sort of wheeze and gasp and moan.

Shortly after my meeting with the evaluator, I found myself sitting in front my computer, filling out the Google AdSense form, watching aesthetic pride and decorum slip away. Funny how looming bankruptcy will change your priorities.

When I went on to my OpenSalon blog to read a comment, something in the left-hand margin caught my eye. It took a moment to register. But, yes, it was true: Google AdSense was running an ad for my ex-husband’s attorney on my site! This attorney, whom I refer to as Alfalfa, was advertising his “mediation” services. HA! Alfalfa cannot mediate to save his life. He is incapable of negotiating. He writes 5-page missives full of hyperbolic allegations and threats of sanctions. His histrionic phone conversations invariably mushroom into hour-long rants in which my attorney can insert no more than a few words. His ad for “mediation” misleads the public. He is the lowest form of vermin. And he is desecrating my blog site.

But if I make some money off him, who cares?

Two of my bloggeauges suggested I corral my friends into madly clicking on Alfalfa’s ad. For those of you who are AdSense virgins, here’s how it works: the person hosting the ad only gets paid if someone clicks on it. The advertiser then pays per click. I considered this tactic until it hit me: what if Alfalfa’s able to track those clicks back to my blog? Yes, I write pseudonymously, but what if he reads enough thinly-veiled details and figures out who I am? What if he reads the part where I call him a weasel? This is the lowlife who has actually filed a civil suit against a major custody evaluator in town, I suppose for the hell of it. Do I really need to risk adding more fuel to his litigious fire?

So I told friends not to click. Every so often I check my blog page to see if he’s still there. He is. And you know who else has joined him? On the post where I write about my son’s problems in school? My son’s therapist! And a few days later, who joins my ex’s attorney and my son’s therapist? The alternative school that my son attends! There, on my blog page, in neon blue letters!

Granted, the prospect of losing my son and all of my money has me just a wee bit paranoid most days, but I wonder: is the stalking merely a coincidence, or is it intentional? Have these vendors tipped off their SEO people to place ads on my site? Are they keeping tabs on me, culling information to be used against me in the custody hearing? If I blog that my ex’s attorney is studly and smart, would it help?

And what do I get for all this worrying? As of yesterday, when I checked my AdSense account, just sixty cents. Sixty #$&*(?! cents.

Since I have already divested myself of good taste, I am considering doing the same with caution. Anyone shopping for a divorce attorney, therapist, or alternative secondary school, please let me know. 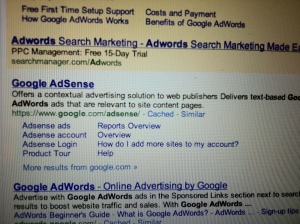