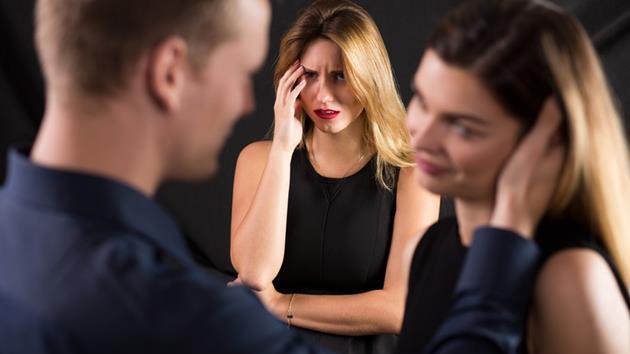 Hard to accept, but the reality is, the emotional affair partner was there for him and understood him in the way that he needed. All too often, she is someone who was is in contact with him on social media, in social circles, family circles, work circles, whatever the case. She filled the gap and was willing to be a part of your relationship knowing all too well the troubles he had with you.

What the emotional affair provided him:  Emotional validation that he is good and adequate, she understood his frustrations with you. She most likely provided suggestions such as flowers, gifts, what to say or not say to help make things better in the marriage.

The result: He felt heard, understood and calmer, and he associated these good feelings to the EA.

The missing link in the marriage:  Both spouses were unskilled in how to validate one another daily, despite the differences, being able to identify how you are both doing and being something positive in the relationship.

2. What he felt: He wanted sex and wasn’t sexually satisfied.

What the emotional affair provided him: She made him feel desired sexually and responded with flirting and innuendos and most likely gave him some ideas on how to please you.

The result: He felt more desired as a sexual partner and more attractive, most likely leading to working out and buying new clothing as well as trying to please his spouse, but, at the same time, thinking of her. He associates the other woman’s sexual openness to his need to be desired as a sex partner. He associates these feelings to her when he is with his spouse and confusion may occur leading to obsessiveness and need for more contact with his emotional affair partner.

The missing link in the marriage: Intimacy and sexual desire weren’t consistently worked on and protected in the relationship.

3. What he felt: Bored in the relationship, like they were “roommates,” instead of a married couple.

What the emotional affair provided:  A sense of fun and play, even coordinating an event that she may be present at with her own spouse or significant other.

The result:  He arrives at the social gathering, eager to have fun, however, preoccupied with the emotional affair partner. When his spouse questions his preoccupation with her he brushes off the concerns by telling his wife, “she is just a friend.

He shares with his affair partner, how the time went, and they both find a common theme, generally leading to a thought, if not said verbally, that they could have had fun together if the spouses were not involved. The fantasy of meeting and being together appeals to them both.

The missing link in the marriage:  Enjoying pleasant activities together and doing the “clichéd” but effective date night. You both needed to protect and make time for one another, invest in a sitter, nanny, in-law, older sibling to watch the kids if necessary, but you failed to keep those times alive and nourished.

4. What he felt: He wanted to talk to his spouse, but when he tries she is always busy with the children, work, commitments and can’t talk or find time for conversation with him.

What the emotional affair provided him: She was available and provided him company and a listening ear. This happens many times with those that travel.

The result: She becomes his companion and he feels connected to someone that does not make demands on him. He may, given the circumstances, have her join him on a trip at some point.

The missing link in the marriage: Not being mindful of when you call one another and when you are both drifting apart or disconnecting. It takes active participation to notice, remember and follow up on the call or his need to communicate if you were not able to talk at the time he reached out.

5. What he felt: Controlled and not trusted due to your questioning and checking his phone, iPad, etc.

What the emotional affair provided: He may have decided to now escalate into using “burner numbers.”  He gets more strategic to protect his connection with his affair partner.  (question, in a situation like this, wouldn’t the EA affair partner offer him the trust that is missing in the marriage?)

The result: Adrenaline, the rush of secrecy and a feeling of being alive occurs.  The addictive mind starts to obsess with the fear of not being found out, which fuels the feeling of being desired, not being bored, understood and validated.

The missing link in the marriage: It’s time for couple’s therapy. There is a need for someone to help with what is happening in the marriage, go to therapy each week. Commit to regular therapy times and protect that time will have a positive effect on the relationship. When you find, yourself checking computer use, cell phone calls and social media accounts, there is a reason for that, use your wisdom, be mindful and listen to your gut.

6. What he felt: Guilt over the emotional affair. “I don’t want to hurt her, I should not be doing this.”

What the emotional affair provided him: His affair partner is understanding and may even make the suggestion they stop corresponding.

The result: The emotional affair most likely renews the need for a connection with random unnecessary excuses to continue to see and talk to each other.  He feels guiltier which spurs on the adrenaline rush he gets from engaging in the affair.

The missing link in the marriage: Remain aware of how you are responding to his odd behavior during his affair. Odd behavior which is usually projection and accusations of you doing something. Counseling is essential at this point.

7. What he felt: Anxious and distressed about being in the marriage and desiring the emotional affair.

The result: He tries to find ways to make his wife leave him first to relieve the guilt he feels over the affair. Perhaps this has happened to you, you may have argued, stood your ground, asked him to leave. He may go, and you separate, or he stays at a friend’s house. In these situations, divorce is in your future.

The missing link in the marriage: If this is the case, time for personal reflection, counseling, self-care, support and a willingness to look at your part in the demise of your marriage.  Stick to your values, avoid generating an emotional affair as well to get back at him or relieve your own pain.

Emotional Affairs have become increasingly prevalent particularly with social media and technology.  If your husband becomes involved in an emotional affair explore your values, stick to them, be mindful of what you want and follow your instincts.

Sometimes, as a divorced woman, it’s best to spend time with yourself before dating or entering a new relationship. Put some time into exploring what it feels like to be on your own, with yourself and learn how to respect your feelings and needs.

Emotional Affairs may not all lead to divorce, people can recovery and stay married, it really depends on the relationship foundation you both share and are willing to strengthen. Those that can stick it out, can work it out.

What is an emotional affair partner?

Why does my husband have an emotional affair partner?

Your husband has an emotional affair partner because both of you as a couple were unskilled in validating each other’s feelings. When Husbands feel inadequate and insecure they want their wives to appreciate them for what they do right versus what they do wrong in their relationship. Your husband’s emotional affair partner understood his frustration and made him feel good.

Can lack of sex force my husband to have an emotional affair partner?

It’s possible for your husband to have an emotional affair partner because you as a couple did not work on intimacy and sexual desires. It’s quite possible that she made him feel desired sexually and responded with flirting and innuendos. He may appreciate his emotional partner’s sexual openness and relates it to his need to be desires as a sex partner.

The emotional affair partner’s availability and willingness to listen to your husband made her a better companion at a time when you were busy at home with children.

Why does he not quit his emotional affair?

He does not quit his emotional affair because of the emotional bond developed over a period of time. He feels drawn to her and makes random excuses to see and talk to her. He feel guiltier which spurs on the adrenaline rush he gets from engaging in the affair