I spent the entire day outside enjoying the fresh air and cleaning up the yard after a hard, snowy winter. The push mower came out of hibernation as I ground down tall grass in a couple of areas that I gave up on last year. I noticed the mole was busy under the snow and now mounds of dirt speckle the lawn marking entrances to his tunnels. The flower beds were choked with leaves (I swore I raked them all up last Fall!). The trees, ravaged by wind and ice, dropped lots of limbs and twigs… all of which need to get picked up before the lawn mower goes over that area. I have dozens of large bushes and grasses that stand in a long silent line waiting for pruning.

My to-do list is growing just as quickly as the daffodils are poking their way out of the dirt.

For most of the day it was just me, Mother Nature, and my friendly nuthatch. The three of us had the world to ourselves as all the neighbors were away during the afternoon. It was nice, but with only one doing the work, I felt like I was trying to change the tide with a spoon and a teacup.

A friend of mine called and offered to come over. What task did I need help with? Where could the two of us do the most damage? We went to town on the fallen twig problem. After an hour or two, the lawn and the forest were branch free.

In the end, I had a burn pile big enough to rival one built for a Texas A&M pep rally.

Pyrotechnics aside, working outside with my friend reminded me of the interconnectedness of nature.

Every thing, every organism, every cell is intimately tied to every other thing, organism, and cell. The snowdrops hidden under the pile of chestnut leaves – those first spring blooms are protected by a layer of warmth and protection provided by the dead leaves. My little nuthatch friend picks bugs out of the folds of the pine bark, his grooming removes insects that are harmful to the life of the forest. The earthworms I spotted in the dirt as I pulled weeds, they help to improve my clay soil. 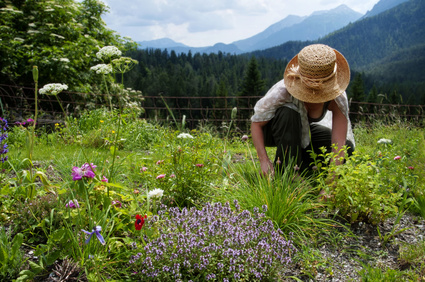 We’re all connected. And I’m connected to them. Working outside brings me happiness.

Having my friend there for a few hours of yardwork was a nice surprise.   We were able to catch up on conversation, share some frustrations, talk about job searches, and get in a bit of exercise. I was able to complete tasks that I couldn’t handle on my own. The dead pine that snapped in half during a wind storm? The pieces are now on the burn pile. The two of us easily moved what was too difficult for me to drag by myself. We’re all connected.

Once I was back on my own I sat outside re-reading my trust book until the light became too dim to see the pages. I watched the setting sun, thought about the work that still remained and noticed that the front fence needs a paint job.

Do bears feel like this? Do they wake from a long winter’s nap and stagger outside with a to-do list: Eat, fatten up, have babies, eat more. Do they look at the task list with dread or do a big stretch and think about how lucky they are to be alive another day and spend some time outside? Because that’s how I see it – I’m lucky to be outside and to be connected to a great big world filled with helpful people and happy little birds.