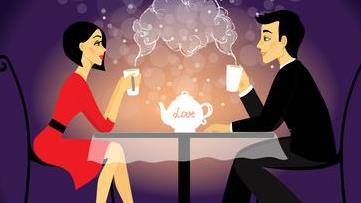 I remember my first date after divorce. He asked me to meet him for coffee so that we could discuss “work,” but, he was really just interested in getting to know me better- good thing, because I was equally enticed with the idea of spending time with him, and it felt good to be noticed and found attractive again after years of feeling like a nobody!

My date eventually became my husband, and he also happens to be divorced.

Divorced people carry some extra baggage and require additional consideration when entering relationships; but, there are also a lot of great reasons why you should choose a divorced person to date!

14 reasons to date a divorced man:

He will understand your crazy. You’ve got an ex? He’s got one too! Who will be able to identify or commiserate with you better about what it means to be divorced than another who has been through it?

He knows what he wants. Anyone who has been through the wringer of love has learned from living about what they do and don’t want in a relationship, and in a partner!

He doesn’t have time for drama. He’s been there, he’s done that, and he doesn’t want to hit repeat!

He recognizes what’s at stake. His heart has been broken and knows how fragile a relationship can be. He is better-equipped to nurture and protect a relationship and committed to make it work!

He’s in a better position to have his issues under control. Divorce gave him good reason to reflect on his personal flaws. His life has been turned upside down, and he’s had to face what his role was in that situation.

If he’s interested in you, he’s pretty serious. He’s not as likely to have the time or interest of his unmarried/never married counterparts to date around endlessly. If he’s looking for a relationship, he’s already identified positive traits in you that he believes to be a good fit for him.

Practice makes perfect. He’s been down relationship road before and has a much better idea of what’s required. He has earned merit badges for everything from in-laws to PMS, so his experience can be applied to make things run smoothly in your relationship!

He’s wiser for the wear. Life experience can teach so many lessons, and also bring out many special qualities that are harder to come by without some hard knocks. You may discover a divorced lover to be more compassionate, patient, and capable of seeing the long-term consequences of his actions.

He appreciates a good thing. When a man has lived through a bad relationship and partner, he is all the more aware of something (or someone) wonderful; therefore, he’s much better at giving recognition and the right kind of treatment, as deserved.

His love and his trust are worth their weight in gold. He may have been done wrong in the past, so when he opens his heart to love again and puts his faith in you, you can be certain that the gesture is a sign of his high opinion of you and the fact that he perceives you as worthy of these gifts. He will be equally touched by your willingness to love and trust him.

He won’t sweat the small stuff. A divorce veteran won’t be as likely to let all the small irritations and frustrations of life get to them and make them either unbearable as a partner or allow the petty things to damage your relationship.

He knows you like the little things. A divorced man has probably learned that women enjoy all the small gestures of affection for any reason or no reason at all. He may be more inclined to show you his love in ways your former partner never comprehended, from a small love note on your car seat to a flower waiting for you at your vanity “just because.”

He knows it requires team effort. Maybe he didn’t get it right the first time around, but there’s a better chance that a divorced man understands the need for him to pull his weight with household chores, child-rearing tasks, and others. He’s not as likely to claim ignorance in these areas as a first-timer because his ex may have pointed this out to him, or he found out the hard way after living on his own for a while and gaining some appreciation for the effort involved.

Of course, not every man “gets it”, whether divorced or not. A man may have divorced and not learned a single lesson from the experience about himself or matters of the heart.

If you note that the man you are dating still seems pretty clueless about any of the following, you may want to seek romance elsewhere. Steer clear of divorced guys who:

Blame their ex for everything from their divorce. This is a sign that he has not recognized his likely part in what went wrong or taken any steps to improve himself.

Has a shrine to his ex and blames himself for everything that contributed to their divorce. Definitely steer clear of any man who shows signs of not being over his ex, as well as one who seems to idolize her or cannot recognize her part in the situation. It’s healthy for him to be able to recognize both good and bad traits in others and not be blinded by love.

He still seems oblivious to relationship basics such as compromise, communication, responsibility, or accountability. Perhaps this dude needs some more Relationship 101?

He is jaded by his romantic wounds. If he seems to have a negative outlook on love, women, and relationships, you could be in for an ugly future blow-up with a man who is beyond trust and optimism. This poor fellow could probably use some Relationship Rehab!

His ex is still a major presence in his life and causes continual conflict. Kick off those stilettos and run as fast as you can if your love interest’s ex is the reigning “Miss Drama Queen” and appears to either still be carrying a torch for him or thrives on turmoil!

The door to love and a meaningful relationship did not close for you just because you divorced. You can still enjoy a very exciting dating adventure, when you’re ready to meet new people; and, you may very likely still encounter the best relationship ever. You will be a wiser and better-prepared partner, and so will he!