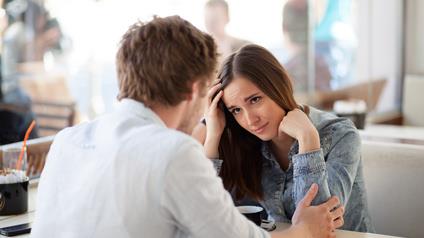 It’s always a shame to hear the news that a couple we know is divorcing. Okay, sometimes we think to ourselves “it’s about time!” because they were such an ill fit; but, those of us who have divorced know that the process is agonizing, so we hate to see anyone else have to endure it.

As often happens, we “lose” some friends or family in divorces because they were originally closer to one spouse or the other. A friendship I lost in my divorce was that of my ex’s cousin and his wife. When we got together, they had only been married a couple of years; so, they were young and happy, as we were, and we enjoyed many fun weekends together until they finally moved out-of-state.

When my ex and I divorced, they leaned toward his side because they were family before we were friends. It stung, but I understood. They made it to 20 years- an accomplishment in anyone’s book! They were mostly what I would call happy; though, I always saw some potential trouble brewing in some fundamental incompatibilities that they tried very hard to ignore.

Even the nicest couples can be taken down by failing to have some very important conversations and making sure they’re truly in agreement on some huge topics.

I can’t emphasize enough the importance of agreeing, or at least being tolerant and accepting on major issues such as:

The couple I’ve described never came to an agreement prior to marriage about having a family. She always desperately wanted children, and he was always on the fence. He always had excuses about why they needed to wait awhile longer; meanwhile, the clock kept ticking and her time to have a baby ran out. I’m sad for her because I know how deeply she wanted to have a family, and I feel that he wasn’t honest enough with her about his true feelings and led her on more than once.

Something as serious as having children is a deal breaker. He was more interested in building a business, which has actually sort of become his child. He conceived the idea and grew it, with a lot of help from her, into a thriving and unique enterprise. The problem is, that he never took her desires seriously. It was always all about him and what he wanted, and she always waited patiently at the side for him to grow up and share a life with her instead of doing his own thing while married to her.

Their situation is sad, but I feel it was so preventable! I realize that a significant other could learn and adapt to different ways of money management. I have seen couples succeed despite religious or political differences; but, there has to be mutual respect for one another’s beliefs and an agreement to either not discuss those controversial issues, or work out some sort of agreement that allows each to express and participate in their chosen spiritual and political practices.

I have also seen some people mature and decide that after establishing a career and having some life experience behind them that they’re ready for a family. I’m not sure how many of these people always knew that eventually they would be willing to have a family versus how many absolutely never wanted children, then later had a change of heart. A child is simply too big of a commitment to not have an opinion about one way or the other. If you know that parenthood is your destiny, you need to be with someone who shares that dream; otherwise, you must be completely honest about not wanting to have children!

For many couples, these huge issues of compatibility have become too out of control to reign in. For any new couple (and for those of us who would entertain being part of a couple again), it is imperative to have serious and in-depth conversations about everything you can think of! You will not always agree. Sometimes one or the other of you will agree to compromise because an issue is not of extreme significance to them. Other issues may prove too serious of a conflict for the relationship to survive.

This is why couples should attend pre-marital counseling, because if you don’t think of the topics to discuss yourself (or for whatever reason feel comfortable bringing them up), then the counseling sessions should bring those to a head! Not every disagreement is a reason to call off a union; but, they at least present the need to delve deeper and discuss why you each feels the way you do, what you’re comfortable with, and where your limits are.

Secrets and hidden needs are like an infection that will continue to fester until they demands attention in one form or another.

A divorced woman confided in me that, after five years of marriage, her husband told her that he was bi-sexual, and he wished to act on those feelings. He told her that he always knew he felt this way, but he was afraid to be truthful for fear of losing her.

The fear of losing someone we care for is intense; however, by hiding parts of ourselves from the person we are supposed to be closest to or ignoring incompatibilities, we not only build our relationship on illusion, but also deny ourselves, and them, the happiness we both deserve!

The woman’s bi-sexual husband decided to act on his sexual needs, which she couldn’t make herself accept. One might surmise that their divorce heartache could have been largely avoided if he had been honest with her- and himself- from the beginning. He loved her, but he should not have become seriously involved if he knew he had desires that he could not live without fulfilling so that she could make an informed decision about whether or not to accept his needs.

At the same time, he deserves to have a relationship that meets is needs, he should have been upfront instead of hoping to sneak such a huge fact about himself into the marriage years later.

Did a secret or an unspoken conversation do damage to your marriage? Do you think it could have been saved with an honest approach, or did it present an incompatibility too huge to ignore?

I hope you will present your most authentic self in your next relationship so that you have the best chance at having your needs met. And, please, don’t be afraid to ask lots of questions and have many deep conversations until you are certain you belong together!