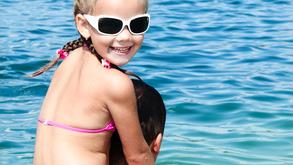 My nine-year old daughter, Siena, and I just finished reading the book Because of Winn-Dixie. What a beautiful story, we absolutely loved it. Opal, the main character, is abandoned by her mother, who was an alcoholic. Opal doesn’t remember much of her and she finally gets the courage to ask her dad to tell her 10 things about her mother. He does and she writes them down and memorizes them so she won’t forget them. As we were reading this section of the book, Siena started talking about her dad. “I haven’t seen or talked to Daddy in a long time,” she said.

“I know,” I responded. My ex-husband, Rob the Great (Alcoholic) abandoned the two girls when we split because it was all too stressful for him. It broke my heart then and, as I watch them struggle with their feelings of him, it hurts even more now.

A few months ago, 14-year old Morgan texted her dad and Rob didn’t bother responding. “Why does he hate me?” she said in tears. “What did I do to him that he doesn’t ever even want to talk to me?”

What could I say? I hugged her. “You’ve done nothing wrong. It’s him. We will never understand what goes on in his alcoholic head. I can’t change him, no one can. And I am so sorry.”

So, like Opal’s dad in Because of Winn-Dixie, when Siena asked that I tell her and Morgan ten things about their dad so they don’t completely forget him, I did. And here they are:

1. He loved the ocean. There was really nothing that brought Rob joy like going fishing, diving or boating. The ocean was his happy place and perhaps the only time I ever saw him at peace. He took Morgan on a few fishing trips. One such trip was a charter for two nights. It freaked me out because there was a major storm expected and I also knew that Rob would probably be drinking like a fish (pun intended) and I feared for her physical safety. Nonetheless, the two of them went and had a great time. Morgan still talks about that trip. Rob often came home with lobsters that were still alive and the girls would play with them before Rob cleaned them and we ate them for dinner.

But the stories aren’t always positive. One evening, I picked up Siena from after-school care and she had a horrible red and bleeding eye. Turns out, she injured it at school and I needed to take her to urgent care immediately. It was awful and scary. I started calling Rob because I needed help with picking up Morgan, getting prescriptions filled, walking the dogs, and getting the children food for dinner. He was supposed to be at an AA meeting. I called him again and again and again and there was no answer. I started getting worried. Where was he? Finally, he showed up at almost 9:30 at night. He wasn’t at his AA meeting, he had gone out diving and stopped by his favorite drinking establishment, The San Diego Brewing Company and was quite inebriated, sucking on a mint to hide the smell of alcohol. Oh the mints! It was my sure-fire way to know that he had been drinking.

2. He loved Disneyland, Universal Studios, Knotts and Sea World. Rob is like a big kid. He loves amusement parks and anything that kids generally like. Part of our household budget involved saving money for a yearly Disneyland trip that was really pricey because we stayed at the Disneyland Hotel and went all out on food and fun. One year, he secured lunch for us at an exclusive restaurant at the park, Club 33, through his employer, the local utility company. Our lunch for three adults and two children without alcohol was $750. It was crazy. We also had annual passes to Sea World, Knotts and Universal Studios.

3. He loved family Jacuzzi nights. Those evenings when we sat in our Jacuzzi threw my entire schedule off. I had it all down to the minute– homework, walk dogs, make and eat dinner, help with homework, baths, dry hair, reading time, snack time, tuck kids into bed and read them a story, prayers, clean the kitchen. And when Rob would say, “Get your swimsuits on. It’s family Jacuzzi night!” my heart sank because it meant that either homework or bedtime didn’t happen, which totally stressed me out. But Rob never worried about things like that and he accused me of being boring, which I suppose I was. He definitely had the pleasure principle down to a science. I often envied his “who cares” attitude in life. The house is a mess. Who cares? The kids need help with homework. Who cares? We have a budget to live within. Who cares? I cared about everything, he worried about nothing (except when he would be getting his next drink).

4. He loved the San Diego Brewing Company. I hated that place. It was where Rob went to get drunk with his “friends.” The food was disgusting but the girls loved it because the bartender and cocktail waitresses were so nice to them. Siena still talks about it.

5. He has a very soft voice, until it gets really BIG. Rob’s voice is very small, like a young boy’s. He comes across as sweet, kind and gentle. Except when he is agitated or angry. And then I’ve never heard a voice that is so explosive, volatile and LOUD. High pitched, whining, and booming. Siena would sometimes cover her ears and shout, “stop talking so loud!”

7. He loved vacations. Rob would generally be a happy drunk when we were away from home, which meant we went on vacation all the time. Anything for Happy Drunk. Big Bear, where we owned a home before it went into foreclosure, was one of our favorite spots. We also went to New York, Maui, Arkansas and Tennessee, Vegas, and on a few cruises. Rob also loved to go to Mexico, where the margaritas flowed like water. He was adventurous and could always be counted on for a good time.

8. He was a great griller. Rob could grill meat like few others. The girls still miss his dinners.

9. He sincerely loved kids. Thanks to Rob, Siena was adopted from Russia. I was sitting on the fence with proceeding with the adoption and Rob said that we needed to give her a home and family. He was amazing with Siena. He taught her to swim by throwing her off the diving board in our back yard. He spent loads of time with her in the pool and playing. His bond with Morgan was incredible. They shared many likes and interests. I know he loved them very much. It was real and sincere, and special.

10. He loved his alcohol. At the end of the day, his addiction won out (again) over wife, children, home and integrity. Beer and vodka (which was harder for me to smell) were his favorites, but he also loved Jack Daniels and pretty much everything else. When we moved out of our bigger home in San Diego, I found loads of mini bottles throughout the garage. I realized that I would never know the amount of alcohol he was truly drinking, but it was significant and appalling.

About a month ago, Morgan posted several photos of her and her dad on Facebook. “I love you forever, Daddy.” I hope and pray that the damage done to their hearts won’t negatively impact their future relationships. And that is the hardest part of divorce, in my opinion– the biggest victims are innocent children.