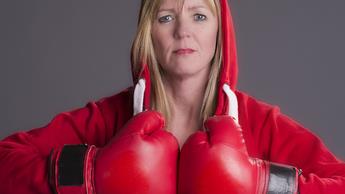 There are two people in my family who are awful to my parents– and they are both pushing upper 70-years old. And as their daughter, how forceful and vociferously do I step in the try and help make it stop? As of recently, very!

The family in question consists of “Hubby”, “Wifey,” and their two young children “X” and “Y”. They ask my parents for really over-the-top favors that I think are totally inappropriate considering their age and physical limitations. Here are just a few examples:

-Wifey called my parents and asked them to come over and help her dust her house. When they showed up, Wifey promptly sat her ass on the couch while my parents cleaned her home from top-to-bottom, including scrubbing toilets and showers, doing a deep clean of the filthy kitchen, vacuuming, mopping and even doing weed pulling in the back yard. She did absolutely nothing to pitch in, not even pick up a toy, and they were apparently were strewn all over the living room. I was furious. My dad has a terrible back and spent the rest of the day in bed. Did she even thank them? Gosh no!

-Hubby works many a graveyard shift and Wifey doesn’t always like sleeping alone. My mother went over to her home every single night for an entire week at tremendous sacrifice. My mother doesn’t drive at night and so either my dad or I needed to drive her there late at night and then pick her up the next morning. She doesn’t sleep so well in someone else’s home and she was so exhausted some evenings that I thought she would fall over. I begged her to reconsider but she felt such guilt that she simply didn’t know how to say no. So off she went and when she arrived, she had to help put X to bed because, Lord knows, Wifey couldn’t (or didn’t want to) do it herself. Here it was, pushing eleven at night and X, who is barely three years old, was running around, hyper, not yet bathed or ready for bed.

-Hubby was at my parents’ home with X when my mother arrived with arms full of grocery bags. Hubby jumped up from the couch, ran over to my mother and tried to shield her from X so he wouldn’t see ice cream in one of the grocery bags. “No! X can’t see this, he will want some!” Instead of offering to help a near 80-year old woman carry in grocery bags, he tried to prevent her from entering her own home, standing in her pathway. It was unbelievable thoughtless, tacky, and even dangerous.

If these examples (and there are so many more I could add, but you get the point) aren’t enough, what makes it worse is that Wifey and Hubby are mean and ungrateful to boot. Almost never is there a thank you, or an offer to reciprocate, or do any act of kindness in return. In fact, one morning that my mother stayed over at their home, Wifey made Hubby eggs for breakfast and didn’t offer my mother a morsel of food. I’m not kidding you—it didn’t even dawn on her that a diabetic houseguest should be offered food. I rushed over there and took my mother to breakfast because her blood sugars were crashing. I couldn’t go in the house because I knew I’d say awful things to them I could never take back. I was shaking in anger.

Not long ago, Wifey’s family was in town and she decided that while they were here, X and Y could not see my parents because the children liked them too much. I’m not kidding, dear readers, I couldn’t make this stupidity up if I tried. So my mother cried for a week. When they ran into the whole crew at a local petting zoo, Wifey gave my parents evil looks and whispered to Hubby that he needed to get X away from them. (Did I say Wifey is passive-aggressive, controlling and unstable? And Hubby goes right along with it. I really don’t know which of the two of them is worse.)

A few weeks ago, Wifey asked my mother to watch X and my dad to follow her to the DMV so they could register their car. Several hours later, we all went to dinner and took X with us (Wifey and my dad weren’t done with their errands). When Wifey found out, she was furious. She had my dad drive her to the restaurant and she nearly dragged X out, as he fell and tripped on the floor while she dragged him by the arm, glaring at us and saying, “Now X won’t eat the food I was going to make him!” It was all I could do not to run after her and spit in her face. Instead, I stayed rooted to my chair like a nice girl.

But the final straw for me is when my mother took care of X all day long and took him to McDonalds to play on the playground equipment. X told Wifey when he got home that he had ice cream, which my mother said wasn’t true but who cares? X is just three-years old. Wifey yelled at X, and then Hubby spent the next two hours frantically calling my mother. When he got ahold of her, he read her the riot act. Not a “thanks” on that phone call.

I was done being silent (I can’t believe I waited this long). I called and texted Hubby. The general gist was this: As my parents’ daughter, I will not allow them to be bullied and abused by other adults. I told Hubby he was out of control and if this continued, I would seek legal counsel on potentially filing a restraining order.

“You don’t understand,” Hubby responded. “X just needs to stay on his eating schedule and Wifey gets really upset.”

Ok, so shut the fuck up, I wanted to scream. I thought better of it.

“You are mean. You are a bully. You are abusive. Keep it up and you will have to deal with me.” I reminded him that once each week, I take steroids as part of my cancer maintenance therapy and this drug makes me not very nice. I was capable of being a raging bitch, including to his mean, passive-aggressive wife. I saw Hubby last night for a few minutes. He didn’t speak to me. I was happy. He has been formally put on notice. If I need to fight my parents’ battles, I’m ready, boxing gloves are on.

And now on to my parents and their responsibility in all of this. Sigh. Well, I wish they had boundaries. I wish that when Wifey asked them to “help” clean her home, they had simply said no. Or when Wifey asks my mother to spend the night, I wish she wouldn’t. But as parents age and their cognitive thinking skills wane, I strongly believe it is my job to protect and guard them the best way I know how. And I’m ready for the challenge. Watch out.