Note: please be advised that names have been changed to safeguard my son’s anonymity.

Earlier this week I stumbled across an education blog that suggested boys who struggle in school lack close friendships. Developmental psychologist Niobe Way proposed that boys experience a “crisis of connection” caused in part by societal messages that close friendships are for girls only, and that the boys who seek them are sissies. The blog went on to link young males’ crises in connection to academic failure, substance abuse, gang participation and general emotional malaise. None of this struck me as particularly thought-provoking–until I read Way’s assertion that seating a boy next to his best friend in the classroom could improve his school performance.

A year ago, I sat in a Parent-Teacher conference with my son Luca, then twelve. Those of you who have read my earlier posts know that Luca is a complicated child. He has received multiple diagnoses–Bipolar Disorder NOS, ADHD, Anxiety Disorder NOS, Tic Disorder NOS, Disruptive Behavior Disorder NOS, and a question mark after Asperger’s–none of which fully fit Luca. Medication, therapy, social skills groups: we’ve tried them all. None of these interventions has produced any long-lasting positive change and some of them–like the therapist who lobbied me to build a boy-cave for Luca directly outside my bedroom door–have been truly wacky.

For many parents of special needs children, the biannual Parent-Teacher conference is a wild ride, and in my case one that I anticipate with bilious dread.  The conference that I refer to here came in the middle of a particularly bumpy year, a year peppered with frequent teacher phone calls to inform me of “incidents” or meetings to discuss “concerns.”

I braced myself while Luca read aloud his self-evaluation. As the teacher and the School Director delicately unpacked his comments, the profound loneliness lurking underneath Luca’s trademark dismissiveness bubbled up.

“I don’t like sitting with kids at lunch. People try to talk to me, and I don’t know what to say,” said Luca. “So I don’t say anything.”

“What do you mean, you don’t know what to say?” I chirped in that nudging-Mom way, which really meant: Here are some kids who might want to get to know you! Can’t you at least act friendly?!

Luca shot me a you-don’t-get-it look.

“I mean, I don’t know the right things to say.”

“But, you have lots of things to–”

The School Director interrupted me with a polite but firm you-don’t-get-it look.

“I think that’s a really good strategy for you right now, Luca,” he said, meaning, this is that strategy we’ve worked out together but now it’s time to let your mom in on it. “Some kids are used to you arguing with them. You’re working hard on learning how to say things so they can listen. If you think you can’t get your point across without arguing, it’s probably better not to say anything for awhile.”

I stared at the School Director and thought: this is where we are? You’re telling Luca that his best shot at social success is to not talk to his peers? At all?

Then I stared at my beautiful, tawny-skinned boy with his golden-brown hair and thick dark eyelashes, the boy who, as a toddler, dazzled adults with his child-star looks and verbal finesse. I imagined him now, on the cusp of adolescence, sitting silently on the grass in a circle of kids, watching them banter casually, trying so hard to find a way in.

I imagined him replaying in his mind various times he’d tried to mimic their effortless bantering, only to have the wrong words–sometimes truly egregious words–blast out of his mouth. I imagined what it was like for him to interject a comment, hoping for a favorable response, only to witness this instead: one kid’s face turns red, another child cries, someone else yells, “Shut up, Luca!” And as a wave of disgruntled 12-year-old faces turn towards him, he thinks to himself: why keep trying to fit in if I’m just going to fail?

Luca must have been afraid I was going to utter some dumb Mom comment, offer some lame piece of encouragement, because he turned to me and said:

“Mom, this is why I don’t like to go on field trips. Because nobody wants to be my bus buddy.” Pause.  “No one wants to sit next to me.”

And then I got it, smack in the face. I got a hit off the existential pain Luca carries around with him on a daily basis, and I started to do something I try never to do in front of my kids. I started to cry.

I grew up with a charismatic but histrionic mother who had weekly sobbing fits, often spurred by my own childhood struggles.  I always felt that it was my fault that she was crying, or that I should try to keep her from crying, and that the best way to do this was to keep my own feelings inside. I never wanted my kids to feel that kind of burden so I vowed to suppress maternal tears as much as possible.

But I couldn’t shake the image of Luca sitting alone, scorned, on the bus, and I started to cry. I mean, ugly crying. Heaving shoulders, mascara-streaked face, snorty nose-blowing into soggy kleenexes–that kind of crying.

I expected Luca to have the same reaction I had to my mother’s public melt-downs: disdain and a desire to bolt. Instead, his face softened and he said quietly, “Mom, I’ve never seen you cry before.”

He hadn’t? In my attempt to keep him from feeling responsible for my feelings, had I veered too far in the other direction? Had I come across as cold, uncaring, detached?

Luca started to cry too, albeit in a much prettier way. After tending to him for a bit, the School Director sent him out of the room so the grown-ups could get down to the nitty-gritty.

I was still unraveling, tears practically popping out of my pores.

Luca’s young, but usually unflappable teacher was totally flapped and speechless. The Director, a 30-year veteran of hairy Parent-Teacher conferences, spoke in soothing sound bytes. I managed to get my shit somewhat together, nodding like a Cooperative Parent to all his “suggestions” that were clearly requirements for Luca’s continued enrollment.

“We insist on therapy.”

“Finding a social skills class might be a good idea.”

“When was the last time he saw his psychiatrist?”

“If things don’t improve in a few weeks, we may need to consider a full-time therapeutic companion.”

I staggered out of the conference, dry-crying as one might dry-heave. I passed parents waiting outside classrooms for their own conferences. Some glanced at me in concern; a few of them gave me an I’ve-been-there nod.

I wandered onto the lawn to collect my children. I spotted Francesca first, in her element, seated in a tight circle of gal pals, giggling and murmuring secrets.

And then I saw Luca on the grass. He was in his element as well: standing apart from his peers, calm now, hyper-focussed on his yoyo, deftly maneuvering the shiny black disc out, up, down, back through his fingers.

As I watched him, my mind scanned the menu of previously attempted therapeutic interventions presented to me at the conference. Therapy, social skills, new pills, a shadow. Expensive? Yes. Meaningful? Pffffft.

Because what Luca needs doesn’t come in a mandated $200-an-hour talk therapy session, or in a vial of little blue pills, or in a group of other marginalized kids herded into orchestrated activities.

What he does need is someone who will sit next to him.  In class, on the bus, during lunch.

He’s a boy who just needs a friend. 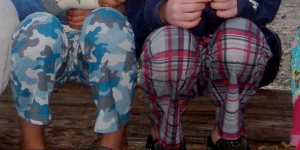