When we first moved into our neighborhood, I took Franny on a walk. It was a gloomy December afternoon, thick with fog, a veneer of gray that brought out every millimeter of grime. We passed the Latino market on the corner, graffiti-streaked walls on a decrepit 70s apartment building, a front yard littered with boxes, Ikea cast-offs, a rusted car collapsed on the grass.

Franny squeezed my hand and grimaced. “We don’t live in a very good neighborhood, do we?”

My stomach fell. Not so long ago, we had lived in an impeccable Colonial with ornate crown moulding, a terraced backyard with a black-bottom blue-tiled pool and hot tub, the scene of martini parties for 200. Driving into my former neighborhood, a tony oasis in a big city, always sent a wave of calm through my body. It was a neighborhood populated by young, beautiful people who seemed not to need to work, their days filled with yoga classes, leisurely dog walks, and strolls to the gourmet market to order $5 smoothies.

And then came the divorce. And a downsize, with my two kids, to a bungalow half the size of my old house. While my new neighborhood wasn’t elegant, it was cool and hip and edgy. Anything we needed was in walking distance: the Pilates place, the espresso and artisanal gelato place, the around-the-corner-wait-in-line brunch place, the $60 t-shirt place, the wine bar. The market, the bank, the library, the attachment-parenting pediatrician.

I still had money then, so I remodeled the bungalow, ripped up the eyesore of a kitchen and put in stainless steel appliances and green subway tile broken up by an artful red line of mosaic glass. I transformed the “shower” — a rusted shower head dangling from a metal rod — into a spa-worthy tumbled-marble shrine. I painted each room a different Craftsman color, swapped out a cramped pantry for a cozy sliver of a powder room, painted gray-blue, with a mission lighting fixture hung over a vintage bathroom cabinet and tiny corner sink.

The house had a wide wraparound porch that I turned into an outdoor living room: recycled fiber rugs, old arm chairs, a wooden picnic table and chairs. I hung lanterns and orange paper butterflies from the roof’s overhang. On summer nights, votives and floating candles transformed the porch into the perfect cocktail party locale. Guests ate puff pastries filled with melted gruyere and caramelized onions, tossed back mojitos, their laughter wafting into the twilight.

I had traded my pocket of elegance for urban hip and  found that it suited my newly divorced self better. I was as a happy as a stressed-out single mom could be.

Then I met Atticus, and we decided to get married. I had purchased the bungalow post-divorce with Prince’s monetary help (bad, very bad idea), and had dimwittedly agreed to dissolve our real estate partnership if I remarried. So dissolve it we did, but not without nights of Klonopin-popping as Prince threw every monkey wrench in his Machiavellian tool box into closing that deal.

I didn’t want to leave the house, and the trendy neighborhood I had grown to love. But Atticus and I couldn’t afford to buy Prince out, and 1700 square feet wasn’t big enough for our blended family anyway.

So we found an affordable neighborhood 20 minutes away, a once-grand, then-scary, now-slooooowly-headed-towards-gentrifictation cluster of spectacular historic homes. Mansions like this… 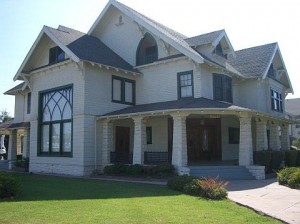 We bought a large, hundred-year old Craftsman that suited my aesthetics and our pocketbook. The day we moved in was the first time I saw the house without furniture. Was this why I hadn’t noticed how stained and warped the hardwood floors were? Why hadn’t I seen the cracked tile in the bathroom shower, the shower, come to think of it, that was shoddily upgraded, and not to period? Unpacking, I muttered each time I had to struggle to yank open a crooked drawer. Most of the windows were painted shut and refused to budge.

As Atticus and I lay in bed that first night, kept awake by the thwap-thwap-thwap of police helicopters overhead ferreting out felons, we clasped hands in a tacit what-have-we-done death grip. What if this isn’t the bottom of the market? I asked myself. What if prices keep falling?

And fall they did. It was not, as I was convinced when we bought the house, the bottom of the market. It was half way to the bottom. It was before two houses across the street went into foreclosure. It was before interest rates dropped even lower and we tried to refinance, only to be declined and told how monstrously underwater we were.

Now I, the Queen of Starting Over, the Mother of Reinvention, the Inveterate House Snob, was stuck. Stuck in a neighborhood that began to represent the gradual erosion of my station in life.

One reversal of fortune led to another. Atticus’s business got hammered by the Great Recession. We spent an obscene amount of money on a custody battle I couldn’t afford to finish. Prince found a legal way not to pay child support.

The house that had once been a deal now was an albatross we couldn’t unload. We considered renting it out and moving to something smaller. “You hate the neighborhood anyway,” Atticus said.

As we debated the pros and cons of renting our house and moving to an apartment, a funny thing happened. I started to feel anticipatory pangs of nostalgia for the house, and the neighborhood, I might have to leave. Somehow, without my realizing, I had grown attached to the Faulknerian ambience in which we resided.

My neighborhood has a kind of community spirit I have never experienced elsewhere in my city. In the fancy part of town where I lived ten years ago, people mainly kept to themselves, up at the top of their winding driveways. In my funky, hip ‘hood, dwellers were attached more to the scene than to each other. There was not one person I would have felt comfortable calling in the event of an emergency.

Here, however, is a different story. Homeowners have a mission to clean up the community, restore historic homes to their former splendor, and make the area a magnet for other socially-conscious, forward-thinking people. My next-door neighbor has banded with some kick-ass moms to start an academically rigorous elementary charter school. The area is teeming with artists, professors, museum curators, gay men with fabulous taste, and a few wealthy land barons who don’t flash their wealth on their sleeve.

Over the summer I attended a neighbor’s 40th birthday party. The house is being gradually remodeled, but appears almost uninhabitable — until you get to the backyard, magical with drought-tolerant plants and maple trees bedecked with lanterns and lit globes, water features and clusters of artfully mismatched chairs around tiled tables.

Sipping Merlot, I marveled at the richness — non-moneyed, but authentic — of my neighbors. The research psychiatrist who treats the homeless. The moms starting the charter school. The neighborhood association head who, together with his wife, has rescued at least half a dozen crumbling homes and painstakingly turned them into museum pieces he rents out to university students.

Our community is filled with people who share our values — artists, progressive thinkers, teachers, social workers. In a city that is primarily about money and status, we stumbled into the one place where people care more about who you are than what you have.

The friends we’ve made are truly people we could call at 2 a.m. if there were an emergency. These are the people who showed up on our doorstep with apple pies, fresh-baked bread, and rolls of toilet paper when we moved in. When Luca was wreaking havoc on the street, one neighbor offered to turn her garage into his own special room where he could scream and get his anger out.

If we moved, we would lose all that — as well as the house that I have grown to love, warped floors and all.

Our rambling playdate house, full of nooks and crannies for hide-and-seek. The grand living and dining room with the box beam woodwork, decorated with pine boughs and white pillar candles for our holiday dessert party. The mahogany deck lush with wisteria. The ice cream trucks that drives up and down our street all day long in the summer, playing deranged children’s tunes.

When Luca visited a few weeks ago, he and Franny sat on our porch swing eating soft serves from the ice cream man. 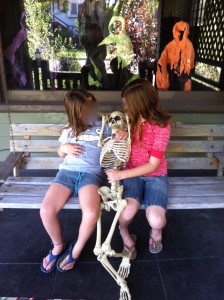 “I like this neighborhood better than our old one,” Luca said.

“You do?” I was stunned. Luca likes to regale people with tales of his rides on private jets, boxed seats to sporting events, and winter vacations in famous ski towns. He is, God love him, a snob. A little like me, before I lost everything to be snobby about.

I asked Franny what she thought of the neighborhood now.

She was referring to her pal who lives on the next block, the girl whose parents have the great backyard.

“Don’t you hang out with kids in your dad’s neighborhood?”

Her dad lives in the whitest part of the city. Lots of BMWs, absolutely no pupuserias.

“No!” she said, emphatically.

“There aren’t any kids?”

“There are kids. I just don’t like any of them. They’re snooty. All they do is talk about all the stuff they have and where they go to school. They’re boring.”

As I listened to Franny continue about how how she would never, ever want to play with those snobby kids, I smiled.

My downward mobility had an upside.