Luca was on a week-long class field trip last week, so Franny and I were enjoying some girl time. The agency I work for had offered employees a cash-out for a week of vacation, and I had accepted the deal. With this unexpected influx of cash, I decided to treat Franny — and myself — to a dinner out. We’d been back from the restaurant for awhile when Franny noticed that her beloved cat Cleo, a spunky one-year-old torty mix she’d rescued from the pound, was MIA. We searched every usual Cleo cranny. We shook the cat food bag, and when she didn’t appear, I held my breath and looked out the open kitchen window, ten floors down to the cement. There was no sign of Cleo, but I knew she was somewhere below.

Unlike our older cat Clementine, Cleo was a risk-taker. When we lived in a townhouse, she perfected the dart-around-human-legs move, and proceeded to hightail it to the yard of a particularly crabby neighbor, where she promptely took a crap. When we moved to a high-rise, she used the same maneuver to scamper out the front door, up and down the shared hallway.

We would often find her standing with her front paws on a window frame, peering at the air between her and freedom. More than once, we had to yank her from the edge. I told myself she knew better than to lean too far over. I wanted to believe this because our airy apartment is lined with windows, and I couldn’t afford the $20 a pop it would have cost to screen each one.

Franny and I walked the perimeter of the building, peering into bushes until we heard a long, low, wrenching meow. She was nestled in the dirt under a shrub.

I told her to run upstairs, fast, and grab a towel and my purse. While I was waiting for her to come back, I ran my hand gently over Cleo’s back. Her body seemed flattened, and she dragged her belly along the dirt. She rested her jaw in my palm, meowing continuously.

Franny scooped her up in a blue bath towel and we raced through the lobby of our building, aross the dark parking lot, and into our car. Franny sat in the passenger seat, cradling the cat in her lap.

The pet hospital is just ten minutes from our apartment, and I opened the car door to let Franny out as I parked. When I arrived in the lobby, the receptionist told me the ER vet wanted permission to administer pain medication and fluids immediately. I said yes, please, and took a seat next to Franny. We sat in silence until the receptionist opened the door and told us the doctor would like to see us.

In the examining room, he stood before us in his blue scrubs, giving us the news in the gentle way he seemed to have perfected. He would need x-rays to tell the extent of the damage, but the shock from the trauma was more dangerous than broken bones. Her blood pressure was dangerously low, and they were trying to stabilize her with a heated blanket, IV fluids, and hydrocodone.

Franny gripped my hand as the vet ticked off possible scenarios. X-rays were needed, and consultations with a surgeon, and a dentist — her jaw was broken, and so was the roof of her mouth. It would take at least 48 hours to see if she survived the shock, and then there would be surgery. Most likely, plural.

“Is she going to get better?” Franny asked.

“What is this going to cost?” I asked.

This half hour at the ER was already $400. The vet quoted me an estimate between $850 to $1500, just for overnight. I slouched futher down my seat as he listed the procedures she would most likely need.

“So what are we looking at, for everything?” I asked.

“You could be at $5000 in a few days. And she would probably need more treatment after that.”

I practically wheezed. Franny looked at me with pleading, tear-rimmed eyes.

“I don’t want you to take out the money,” she said, all too aware of my diminshing finances. “But…I love that cat!”

She started to sob. I looked back at the vet.

“Would you like me to take some x-rays, and then you can decide what you want to do?”

I nodded. The vet left the room. Franny collapsed across my legs.

We stood in front of the x-ray screens as the vet pointed out her injuries: the broken jaw, the palate split in two, a clean break of the femur, multiple, smaller fractures on the other leg. He hadn’t wanted to stretch her out too much, so he didn’t get a clear shot of the pelvis. But there was fluid in her lungs, which would need to be drained, and, and, and…

“Can I see her?” asked Franny.

The vet led us into the triage room, where Cleo lay on a small metal bed, underneath a heated blanket. Fur was shaved off one forepaw, where the IV was.

“Why is blood coming out of her nose?” Franny cried.

“Because of the injuries in her mouth, and her sinuses,” the vet said.

Franny dabbed the blood with a kleenex. Cleo held her head up, her eyes tiny slits.

“Cleo?” Franny bent down to her eye level.

“I do believe she knows you’re here,” said the vet.

I motioned to the vet so we could speak privately. We stepped around the corner, back into the examining room.

“And it could be more,” he nodded.

“Euthanasia is a perfectly reasonable choice,” he nodded. “But if you’re going to do it, it’s better to do it now, because she’ll be feel worse in the morning.”

“Then let’s do it,” I said, hating how cold and pragmatic I sounded.

“Do you want me to play up the injuries to your daughter?”

I gazed into his eyes, as blue as they come.

Franny stroked Cleo’s head as the vet explained how hurt she was, and how grim her prospects. He told her how much he’d loved his parakeet, Roger, who got sick with pneumonia, and how angry he was when his parents euthanized the bird when he was at school.

“But they did the right thing,” he said.

We chose cremation, another $120 for the ashes and a memento of her paw print in clay.

“Do you want to stay with her?” I asked Franny.

Franny went back to the waiting room as the vet held what seemed like an enormous syringe filled with pink liquid.

“It’s sodium pentathol,” he said, “the same anaesthesia they use for operations. But this is a lethal dose. It stops the heart after only a few seconds. She won’t feel anything.”

I cupped my palm on the top of Cleo’s head. She turned towards the syringe as the vet pushed down on the plunger. And I swear I could hear a sigh as her head sunk down, slolwy and gently. The vet pressed his stethoscope against her chest.

“Her heart’s stopped,” he said.

Franny and I sat in silence in the car on the way home. Just a few hours earlier, Cleo had been there with us. And now, we were driving home without her. The moment felt eerie, almost palpably empty. I looked over at Franny when we stopped at a light. Around her wrist was the cat’s collar, black with a purple heart that said “Cleo.”

I wrapped my arm around her shoulders as we crossed the parking lot and up the stairs of our building. We said nothing. There was nothing to say.

It was awful walking back into the apartment. Clementine padded across the living room, looking up at us. After I went to the bathroom, I poked my head into Franny’s bedroom. I could make out her form under her duvet.

I went around the apartment, closing every open window.

Cleo died just six days ago. Even if I’d had money to throw at every state-of-the-art medical intervention, I don’t know that keeping her alive would have been the right thing to do. What if her jaw never worked the way it was supposed to, and she couldn’t really eat? What if we’d had to amputate her leg? What if she sunk into a permanent depression because she no longer had access to the spunk that defined her?

Still, even knowing all that, it’s a cold, hard, clinical fact to swallow: I euthanized the cat Franny loved with every fiber of her 12-year-old being because I couldn’t afford medical treatment. Pets, like people, die without access to affordable healthcare.

After spending $500 on a dead cat, there’s no money for a new one. And, after the window fiasco, I don’t think it’s responsible to get another pet.

Franny, ever resilient, has bounced back. Almost alarmingly so. She has refused to discuss what happened, and insists she’s fine.

Yesterday, I went into her room to straighten things up. Because Luca doesn’t have his own bedroom, his stuff is sprawled all over her floor. I muttered to myself, then glanced around the room trying to figure out a spot for his things, when I noticed Cleo’s collar on Franny’s bookcase.

I stepped closer, staring at the neatly crumpled Kleenex in the center of the collar. It was the tissue she’d used to dab the blood from Cleo’s nose.

And for the first time since that awful night, I started to cry. 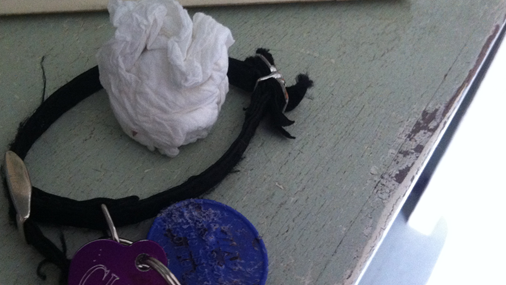