A few weeks after we moved into our house, the president of the neighborhood association sent out an e-mail looking for someone who would adopt a kitten who had been snatched up moments before he stepped off the sidewalk into oncoming traffic. This is the photo that was attached to the e-mail: I made the mistake of showing the photo to the kids, who begged me in their pitiful, mooey-eyed way to adopt the cat. We had recently lost a cat to a coyote, and then lost yet another cat, who freaked out when we moved, darted away, and was never seen again.

So we brought home Luigi. We set him up with food, cat toys, and a litter box in the mud room. He knew what to do with the food and toys but he refused to use the litter box. REFUSED. He would sashay right by it, fix me with a defiant glare, and defecate on the floor.

And In the fireplace. The kids’ beds. The laundry hamper.

I was continually finding fossilized cat turds and the house stank of cat poop. I threatened to give Luigi to a shelter, but the kids adored him, despite his deep-rooted psychological problems. So I compromised by decreeing him an outdoor cat.

Meanwhile, we adopted Clementine, a well-behaved, ladylike calico who always did her business in the litter box. Clementine got pregnant (I was a little late getting her to the vet to be spayed) and we kept one of her kittens, Fred. Fred also used the litter box. We kept food and water on our deck for Luigi, but he was tenacious about finagling a way inside the house. He crawled up the screens, ripped them to shreds, then pulled them off, jumping through a window. He figured out how to use his paw to open the doorknob to the french door leading onto the deck, so we had to put a bolt on the door.

And once inside, he would immediately take a crap. 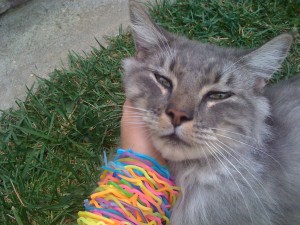 So I resigned myself to praying he would meet an untimely death crossing the road, or crossing the wrong cat. But no such luck. Luigi, like cockroaches, seemed built to survive the Apocalypse.

Recently, we decided we needed to rent out our house. Between the custody battle legal fees, lack of child support, and Atticus’s business reversal, we could no longer swing the monthly overhead on our home and felt it was unlikely that we could recoup our money if we sold it.

So we found renters for our home, then rented a much-smaller townhouse ten minutes away from our old place. We moved in two weeks ago.

Franny’s job during the move was to shepherd the cats. Since the rental had carpeting, I told her that Luigi must be put outside immediately.

I was directing moving men when I heard Franny on our patio, calling for Luigi. After several minutes, she stepped back inside, fighting back tears.

“I keep calling him and telling him there’s food, but he doesn’t come back. He’s gone.”

I fought back a Grinchy-like smile. Finally! Luigi was out of our lives.

“He’ll be fine,” I said callously. “That cat is indestructible.”

A week later, as I was making dinner, I heard muffled meows. Persistent muffled meows. A feeling of dread rose up from my stomach as I glanced out the window and saw Luigi howling in the hedge.

Franny and Luca screamed and ran outside, re-emerging with a triumphant Luigi.

“He found his way back, after a whole week!” Franny said.

“That is one smart cat,” Luca said.

Franny, Luca, and Luigi all stared at me. I sighed, defeated.

“He can come in to eat. But you can’t take your eyes off him. And when he’s done, he goes right back outside.”

Luigi has been back for a week, and so far, he hasn’t defiled the townhouse. The grudge I’d held against him for years has slipped away, replaced by a new-found respect for his tenacity and determination. Despite years of seeing our other two cats get preferential treatment, and being relegated to a life on the margins, Luigi never slid into the abyss of learned helplessness. The sheer force of his will, and his refusal to be beaten down, are inspiring.

Now, when I look at Luigi, I no longer see a crapper. I see triumph of the feline spirit. Today, I’m thankful for the cat who came back.