So I am en route back through the ATL airport via Delta .

So far so good, but i am wary.

This was on the side of the plane.

Yesterday, was, to use one of Al’s phrases,

We woke up in our old home town and it went downhill from there.

Somewhere on the NJ Turnpike I told him AGAIN how much I’m dreading this week at home without kids. I’ve been dreading it for 6 months.  I’ve mentioned it several times; a month ago, them 3 weeks ago then 2 weeks ago. I said that I was worried about how I was going to handle this week  and I wished he could come for the weekend.  Yes,  I know we just had 6 days together, and he’s kind of said over the past weeks that he would look into it, etc.. But nothing came of it.  I didn’t pin him down about it, I just slowly let the feelings build until yesterday,  I said to Him again that it hurt my feelings that he didn’t try to come for the weekend, when I so clearly needed him to.  I don’t often say “I need you.”

He got mad and there was yelling.

And crying by me.

And his asking “Don’t i get credit for taking a week?”

“Hey.  If I’m such a burden you never have to see my ass again.”

Then I didn’t talk to the kids all day.

Which made me sad.

I guess they never had wifi because I didn’t hear from them.

So we got back to Al’s apartment, tense and quiet but okay.  Lessons learned by me, when I need for him to answer me and he hasn’t,  I don’t let it fester like a big ole mean zit for 3 weeks.  Lesson learned by him, that it is better for him to explain why he can’t do something vs ignoring it and hoping I don’t bring it up again.

Because I don’t forget shit..I just decide that he doesn’t care.

We were just starting to make strides to talk again, it was my last night, we watched some TV but both of us knew that when the program went off we were going to talk and hold and make up.  So at 9, we hug and make motions to talk and his door buzzer goes off and his 18 year old son is standing there, bags in hand, saying,

So…  Al has a tiny one bedroom apartment.  I was so disappointed, I went in the bathroom and cried.  We hung with him awhile, I packed, and then we went to bed and tried to whisper some resolution to our shit storm.  I cried and he whisper yelled and threw a pillow.

See, Al and his mean ex-wife spent 20 years fighting.  Open conflict.  You fight loud and then get over it.  Stanley and I had no such dynamic.  We had little conflict just not much communication.  We were roommates at the end.  Roommates that kind of ignored each other, but we didn’t fight.   Also, I didn’t grow up in a house with open conflict.  I am really not comfortable with loud yelling.

Fighting to me = bad.

I think that if he is yelling at me like that

he must hate my guts and we must be breaking up.

That annoys the shit out of him and he yells some more. 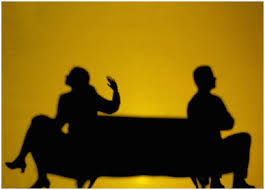 He can still yell but love me and want to be with me.

If I yell, that means pack yo ass.

There is no way his son didn’t know what was going on.

Because I was crying softly but blowing my nose loudly.

We slept 3 hours and got up and tiptoed out at the crack of dawn back to the airport.

I have no idea of when I will see him again.

I can only hope I will.

He said he hoped it wasn’t our last kiss.

We were both tearful and so disappointed

to end a great week on such a bad note.

**I cannot get this font right etc to save my life. Forgive me.  Blogging on the plane was not my friend.