It’s been kind of a fuster cluck of a few days. I was on Friday morning but nest exchange was at 5 pm.

In addition, the visitation for my friend’s dad was last night.

I needed to take The Boy because his best friend is my friend’s son.

So, between the visitation and the vomit, Stanley and I agreed

that we would both stay in the nest last night.

It was a busy night in the nest.

He stayed with the girls and The Boy and I went to the funeral home.

When we got back to the nest, Stanley was cooking dinner.

We ate all together and then I went to my room and shut the door.

This morning was the funeral.

Of course we all needed to go.

What do you do, these are family friends?

Friends that we vacationed with pre-divorce.

Friends that we went to dinner with on Friday nights pre-divorce.

We still go on Friday nights, just some nights it’s Stanely and kids

and some nights it’s me and kids.

Once it was me and Al and kids with them on a Friday night.

They’ve been very resilient, these friends, through our divorce,

they just take whichever one of us is on nest duty.

So, Stanley and I agreed we needed to go today as a family.

I helped get the kids ready and then we all loaded up.

We did take 2 cars because I was leaving there

to go pick up food for the family.

The five of us sat together during the service

After,  he took the kids home and I went down

to my friend’s house to help with the food.

I gave the kids kisses and told them how proud

I was of them for their good behavior and signed off

until tomorrow at 5 when I go back on duty.

(And my kids did great.  This was a traditional

The reception at the house was fine.

about and telling stories about the deceased.

Then an old acquaintance made the statement to me,

“I saw you all at the funeral, you don’t look like a broken family.”

Nothing makes me crazier than the concept of a

Seriously, like what the heck is a broken family anyway?

A family that doesn’t live all together?

No family lives all together forever.

people move back in, you are still a family.

As far as the children are concerned, we are their family.

Let me say that like I was saying it in my head.

WE ARE STILL THEIR FAMILY, YOU CRAZY BITCH!

I don’t ever want them, ever,  to think any part of them is broken, 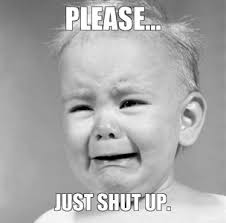 If Stanley and I were at war, (thank God we aren’t)

but if we were, we would STILL be their family.

When they are adults and being interviewed for their Nobel Prize,

the interviewer will say, “Tell me about your family”

“Tell me about your broken family.”

people about the concept of families, one MORON at a time.

We just don’t live all together.