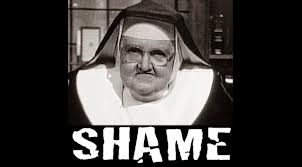 My divorce has caused me a whole lot of shame.

And grief, and sadness, and tears, and feelings of guilt, and constant worry that my kids will never be able to have a stable, healthy relationship, and constant worry about money, and I’ve eaten a lot of potato chips late at night, and I’ve taken a lot of Tylenol PM to sleep and Xanax when that didn’t work, and fed my kids too much frozen pizza, and I’ve worn my clothes so many times some of them have holes in them and it’s starting to get embarrassing, and then there is the occasional questioning of my decision to divorce in the first place, because, let’s get this clear, I am a total glutton for punishment…

As Al put it over the weekend,

“Honey, shame is for suckers.” Okay.  I get it.  It is.  But he has also said before that he has determined from observing the way that we have handled our divorces that he thinks men have a better ability to make a decision and not look back whereas women seem to be looking back and examining their decisions often. What he meant by ‘often’ is ‘constantly’ in regard to how I have handled my divorce.   He is right.   My self flagellation is getting really old.

Plus, that hair shirt is itchy. I had a really great weekend with my lovah.  It was the fastest 49 hours ever.  We had some kid time, some us time, some hard discussion time, and lots of holding time.  We talked about where we are in the process now. The process of letting go of those old lives and moving on.

My 2 year divorce anniversary is next week.

It is past time for me to let this shit go and move on.  Stanley has moved on, he lives with his girlfriend.  Al has moved on.  Cuckoo Momma needs to move on too.

I seem to be able to forgive everyone but myself. I told Al that I may never be able to let my shame go (and really it is the shame of not faking it in my marriage for my kids) until they are grown up and I see that they are okay.  I need to see that I didn’t do permament damage by not staying with their dad even though our marriage was over. But I’m going to try.

It’s really time to give myself a break and move on.

The sweetest man in the world brought me a present.

Yes.  My divorce did come with perks.