when I talk about a master of sex

(except for maybe the whole sex-in-the-shower ear).

Sure you were swimming.  Looks like sex ear to me! 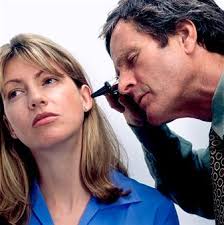 But, I’m actually talking about the Showtime show

that made it’s debut on Sunday night. 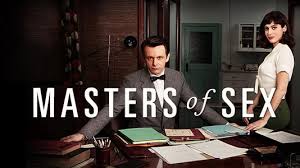 I have a friend, another LCSW, who wanted to

come over and watch because she doesn’t have cable

and is doing couples work on sexual dysfunction in her clinical practice.

Whatever, I just wanted to watch because I’m a ho and watch racy shows on TV.

It was very interesting.

And very irritating because she hates dogs and my dog

was hysterical to have a visitor at 9 pm and kept wanting to sit in her lap.

So, I dealt with the damn dog for 55 minutes.

Also, I was on nest duty and the kids knew something was up

and kept coming in the room for various reasons when they

should have been asleep.

They were probably all watching it upstairs.

Back to the show.

First.  It was eye candy heaven and I am a junkie.

I’m talking about the sets and the clothes. 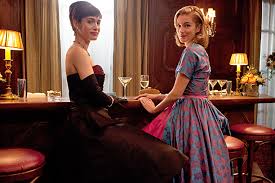 I couldn’t find good images of the sets yet, but it is retro heaven.

And of course, it is Hollywood so everyone is much better looking

than they are in real life.

who pioneered the study of sex in the 1950’s.  There had been

previous studies of sexuality but it was about sexual habits,

not sexual arousal and orgasm.

What men don’t know about sex on this show

would fill an arena of World Book Encyclopedias.

We start off seeing Masters watching a prostitute with her client through a peephole.

He interviews her later and told her her orgasm lasted 9 seconds.

and realizes he needs a female partner,

finally and thank you Jesus.

She has modern attitudes about sex.

She has children, is twice divorced, and wants a career,

to the horror of the good ladies around her who say

things like, “In my day, I thought my children were important.”

was an interesting part of the show.

an interesting part of the show.

But Masters is completely repressed sexually and

for all of his curiosity in his medical career, he has none

whatsoever in the bedroom. 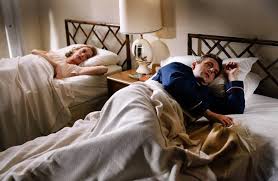 They are struggling with infertility.

So, she takes her temperature.

He kisses her once, keeps all his clothes on

and ruts at her from behind, then she has to lie flat

with her legs drawn up on her single bed while

Basically, Virginia becomes the person who gets

his study on track.  She has a way with people

that he will never have in 2 billion years (think, Stanley)

getting off, in a clinical setting.

Some play alone and some play with others. 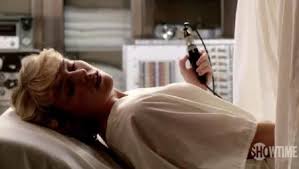 What he doesn’t know about transference would also

Nowadays, she would have sued his ass off.

It has occurred to me that he might have

just been a big perv all along.

Interestingly enough, in real life they do have a sexual

relationship for many, many years, and in 1971 he

divorces his wife and marries Johnson.  They divorced in 1992.

She said before she died recently, that it was never love,

it was always a business arrangement.

I think she was the brains of that outfit.

All in all, it is an interesting show.

There is nothing that my friend can learn clinically from Masters of Sex.

And there is a place for that on my TV lineup.