Al came in for the auction on Saturday, totally exhausted since he was in LA the day before, and had to fly home before flying here.  I picked him up bright and early on Saturday and worked his ass off hauling tables, drinks, auction items and the like up huge concrete steps to the event site.  I dropped him off at the hotel at 11:30 p.m and went home to the kids because I was actually on.  We spent Sunday with the kids but I got off at 5 and so we got to watch the Oscars together last night. It was actually pretty funny to get his take on the whole thing.

Our thoughts are as follows: I’ve never seen Family Guy or Ted (Although Al loved it, don’t deny it) but I still thought he did a fine job.  I was not offended by the We Saw Your Boobs song, because, hey, we did.  I wish he had followed it with a We Saw Your Junk song but they didn’t because we don’t see near enough junk.  He is a good singer!  Who knew?

I know most people voted this best, but I did not. I thought it was weird with shoulder pads

and I’m ready for her to have hair again; Plus it looked itchy.

Al says I’m crazy and she is effin gorgeous. This was too gorgeous.

Even when she fell.  I mean, for real.  How gorgeous is that?

(It’s Scarlett O’Hara on those big red stairs in their house in Atlanta Gorgeous.)

Al said he doesn’t understand why women wear things they can’t walk in. Okay.  Alot of people hated it.  I think it okay, I didn’t hate it.

Maybe it is because the seams look like prominent nipples and that is fun.

Unfortunately,  I think it was just seams.  Now word is, she was wearing Valentino but at the last minute heard about Amanda Seyfried’s lace gown by Alexander McQueen and started calling in other gowns to try on 3 hours before the event.  So the Prada gown was a last minute thang.  Personally, I would have had my people call Amanda’s people and tell that bitch to wear something different.  She is Anne and was going to win, damn that Amanda.  (BTW, her speech seemed so insincere to me.  She seems like such an actress, who the heck knows who she is in real life.)

Al says he doesn’t like her anyway, he doesn’t know why except he hates her hair.  He doesn’t care that she cut it for Les Mis, that was a long time ago and she has had time to grow it back but she hasn’t so he’s pouting.

(Or as I still remember her, the daughter on Big Love) It was fine.  I would have liked to see it on Anne. Al says she is just okay and she has a pointy chin. (Apparently only Halle Berry can get away with the short hair.)

Snooze again.  But I feel for her.  I love Ben Affleck but he is probably

a bitch to be married too.  I can just tell.  Trust me.

Al says she is gorgeous and for me to shut up. Al didn’t comment, I think he was nodding off.

I liked the dress, but the color with that drab hair color was bad.

Didn’t she used to be auburnish?  Yuck.

Al was talking about ostriches.

I loved this.  She is a big girl and was absolutely beautiful.

Al agrees.  Plus he loves her because “Minnie don’t burn no chicken.” Looks like a pup tent pinned on her by Jumping Bean and Merlot.

Then they did her hair.

It was the worst.

I love her, bless her heart.

ON TO THE WEIRDOS 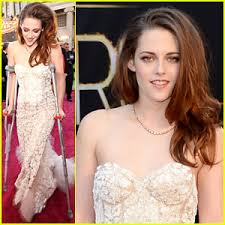 Okay.  I know she was limping and you have to hand it to her for limping/hopping out there with Daniel Radcliffe (because I’m sure Amanda would have substituted if asked) but damn she looked like she took a toke backstage then made out against a wall with a werewolf until Harry Potter pulled her off by one arm.

I told Al that she cut her foot on glass

and he said she must have shattered her bong on the floor. She couldn’t read the card, was teetering and tottering worse than Cindy and Bobby Brady and couldn’t hold her eyes open on stage.  Richard Gere was practically holding her up.

The lasting impression will be Anyway. I could go on but I have one last thing to say.

This is from last night at the Elton John Party. There I said it.  I HATE HEIDI KLUM.

Here is why.  Because somehow I get her tweets on Twitter.

I see them retweeted by someone I follow who likes her.

“I’m having a great hair day!”

And I want to scream.

Because she is fucking HEIDI KLUM.  Her job is to be beautiful.  That is her ONLY job.  She doesn’t have to get up and kiss ass like most of the rest of us to make money.  She doesn’t have to sell something, or make something or listen to crazy people or make kids lunches or make sure kid’s school work is done or their school uniforms are clean enough, none of that.

She just has to sit and get her hair done.

If you are having a bad hair day you are a

We expect you to have a good hair day, EVERYDAY, damn it.

Such a relief to get that off my chest.