I’ve had waaaay too much Stanley this week. I would be way dangerous with one in my purse this week. has had to suffice.

I did need to go to bad mother jail for asking JB what Daddy’s girlfriend looked like.

It was none of my business, I know.

and hit every branch on the way down.

Bitch better quit talking about my lifestyle though.

We did Merlot’s birthday presents and dinner together.  He was all sweet as pie.  I wouldn’t make eye contact.  Then yesterday I had to take JB to the pediatrician, and dang it all to hell, she has the flu.  Stanley was coming on after work and I was going off, so we had texts back and forth about her doctor visit and plan for missing school the rest of the week.  He stayed with her today and I am going to do it tomorrow, with help from Mom.  I came home yesterday and Mom was raking leaves.  My 71 y.o. mother was raking leaves, which is STANLEY’S JOB according to the paperwork.  He does nothing else there and now not even that. 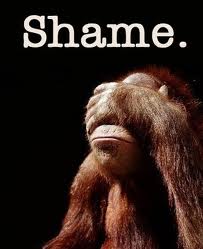 As you can tell, I’m kind of hating him.

Al has tried to keep me centered but when I get like this I get more self protective and resentful of the distance by the minute.  I get all, “What is the point of a bf if I still have to handle all of this stress on my own?”  I shut myself up as tight as a drum and then good luck to him trying to penetrate those walls.  So we aren’t in the best place ever.  He says Stanley hits me in my most vulnerable places,  the kids, and then he goes on about his merry way and I am left with 2 weeks of emotional wreckage processing every decision I ever made, dealing with the guilt and general fuckage.  I’m trying to get over this hump, I swear, but it is so hard.  I feel so down and depressed.

Today on FB, a friend posted this. I made a determination when I saw it,  that today I was going to let it go.

But I feel like I’m drowning in the regret.

Not regret for him, I hate him.

It is regret for putting my kid’s stability in jeopardy.

Still, the sun will come up tomorrow, I know this and I will have

another opportunity to put this down and move on.

At least the girlfriend is a dawg.