And it’s downside for sure.

I know I’ve bored you to tears with it.

But, really, I don’t know how he hides it in his pants. 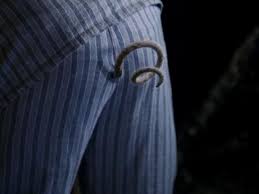 I was technically off this past weekend.  I say technically because he asked me to take Saturday because he had a beer event.   So he had nest duty on Friday night and I came Saturday at noon and he left.  The plan was for him to come back Sunday at 5 and I would be off Sunday night instead.  So, I came in on Saturday at noon on the dot and my head almost snapped off of my head when I walked through the garage.

He had bought a weight thingy, huge, it takes about 1/4 of the garage.

The good news is he moved some of his beer shit out of there.

The bad news is that he also moved out the lawn mower and yard equipment.

I found it in the yard, in the rain. His priorities are beer and weight lifting I guess.

His priority is not yard work, I can tell you that right now.

So,  I did kids and ran into the rain to get the mower and his saw so they wouldn’t rust.   I knew that Jumping Bean wasn’t well by mid evening.  She was whiny and mean and starting to complain of her head.  She woke me at 3 a.m. on Sunday morning burning up with fever.  I was glad I was there because I crawled into bed with her after loading her with Tylenol and dozed while waiting for the fever to break.  I was getting mighty tired.  Then at 7 am., Merlot appeared beside me in JB’s bed and said she felt sick.  Then she started vomiting and didn’t stop for 14 hours.  Oh, she would stop for an hour or so and keep down a few sips of water and sprite, doze, then wake up sick again.  JB had no stomach symptoms, just high fever, head and throat.  Merlot, no fever, strictly puke.

and puke and puke.

So, we have 2 separate plagues up in here.

On Sunday I texted the happy news to Stanley.

But he did come at 3 and bring some provisions.  He stayed and did JB and The Boy, who was fine and raising himself, while I handled vomit.  We both slept here on Sunday night.  Then on Monday morning, he got the boy off and I called the doctor for JB.  He took her and I stayed with Merlot who was better but still lying in a heap.

Really, it took both of us to manage this.

Merlot is at school and JB is still in bed with fever.

I’m hoping I can squeeze a guest post out of Al later.

I’m guessing he will use the weights once.