We are down to our last 6 months of nesting here.  It’s been awesome.  And horrible.  And awful. And beneficial. And worth it, for the past 3.5 years.   I’ve learned a few things along the way.  For instance:

We also have some nesting traditions that have developed over 3.5 years.  For birthdays, we fell into the routine of the family dinner at the kid’s chosen restaurant.  Other than Christmas Day, we never really cook a family dinner at the nest where both of us are here.  Birthdays evolved into the 5 of us going to whichever restaurant all together.  The Boy, sushi.  Jumping Bean, Chinese.  Merlot, Indian.

Which is how I ended up at dinner last night with Stanley’s girlfriend. Last week, we were all at Jumping Bean’s choir performance and they came over and sat with Merlot and I. They held hands and it was weird but okay in a weird sort of way.  On Wednesday night, Stanley and I made plans for JB’s birthday dinner and I said, “Why don’t you ask girlfriend?  I mean, if she would like to come.  I don’t want her to feel left out if you would like her there.” Thursday night rolls around and he comes in for nest exchange and said, “Gf is meeting us at the restaurant at 6:30.  Should we take one car?”  I get in mine with the little girls and he took the hint and headed off to his.  The girls kind of chuckled and I said, “Well, she probably wouldn’t appreciate it if we all came in one car.  It might make her feel weird for him to ride with me.  But on second thought, do hand me my lipstick because I might need to be just a little intimidating.”

The girls both fell out laughing and agreed I should wear my Ruby Garnet Target special. So, we get there and all go in and find a spot.  It was good.  I asked her about her job, her abnormally large hands family, her cats, it was all fine.  FINE.  They were very cute together, held hands, he brought her hand up and kissed it once, and by the end of his Sake, they were giving kisses on the lips. 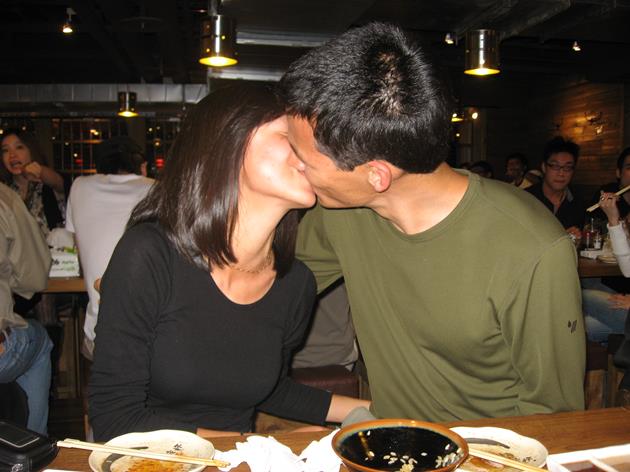 To which the girls looked at me like this… For real.  It was kind of weird but I felt like she must have felt intimidated somewhat having dinner with her boyfriend, his 3 kids and his ex-wife (who was wearing a perfect ruby pout) and that maybe he was giving her physical reassurance and maybe she needed it. (You know I have to process why people are doing what they are doing and all of the emotions driving their behavior.  It’s exhausting, tbh.) but with his lips.

After we finished dinner, we got up from our places and she came over and hugged me.  I mean, she came directly to me and hugged me.  Not a side hug, but a real hug.  Then she whispered to me, “Thanks for inviting me.”  She pulled back and had tears in her eyes.   I said, “It is important to me that we can all spend time together and it be okay, but yes, I will be honest, to see him that affectionate with you is a little bit weird, but I can tell he’s really happy with you and I’m very glad.”  She said, “I hope so.  I want the 4 of us to be able to be comfortable.”  Feeling generous, I said, “Well, I heard him talking to you on the phone once when I was leaving and he didn’t talk to me like that.  Maybe he is better being with you.” And then she said,

“I think men learn from their mistakes.“

Shit fire and sell your matches!  She really did say that.

Stanley and the kids and I came back to the nest and watched JB open her presents.  I stood beside him and told him that GF was sweet and I thought it went really well.   He didn’t really say anything back to me but I didn’t expect it because that is how we roll in the shire.