And I’m a happy momma.

So far, Merlot has said,

I do remember many warm drinks in the UK.

I asked JB to not eat with her fingers and she said,

“Hey, I’ve had to eat PROPERLY for 2 weeks! I’m surprised

they don’t eat soup with both a knife and fork!” 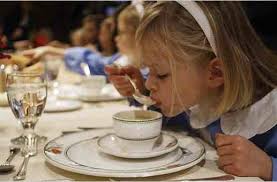 I think they had a great trip.

I’m in the process of unpacking them and starting laundry.

Most of their clothes appear clean and smell like an English Gahden.

Ye Olde Bitch refuses to use her dryer and hangs her clothes up to dry.

Nice if you have nothing else to do with your time.

Whatever.  If I sound resentful, I  AM.

Not that anyone gives a shit.

Yesterday I spent all day at school working the PTA table

to recruit membership and raise donations.  In the middle I

registered my kids and then worked for 2 hours before going

back to the school to sit at the table again before heading to the airport.

I was gone for 12 hours and was almost as tired as the kids last night.

In the middle of the day I got a FB message from Stanley’s girlfriend.

my big girl panties and take care of myself for once.

Yes, that’s the one.

“Do you know what Carrier and flight numbers the family is flying back on today? They are flying into North Carolina, then back here correct?”

“Hey. No. They are on flight 39 Delta to ATL. They are due at 1:05 to arrive, which is only an hour to go. Their flight arrives here at 7:30 tonight. I’m at school registration. Dying to see them.”

“Everyone seemed to have a good time but they are going to be some tired campers for sure. I told him to call me when he lands in the states.  I just checked – the flight is on time.” Anyway.  Typical that she had no idea of the flight numbers, etc.since information sharing isn’t one of her fab boyfriend’s strengths.She has been sort of cheeky on his FB page about the trip and Al hadwarned me that my posting on his page was going to upset her.I told him, I grew those kids, nursed them, rocked them with theirfevers and I was going to post whenever I wanted to.Whatever.  He ain’t no prize.Loving these kids is my primary goal for the foreseeable future.

I told Stanley to come back some time next week.