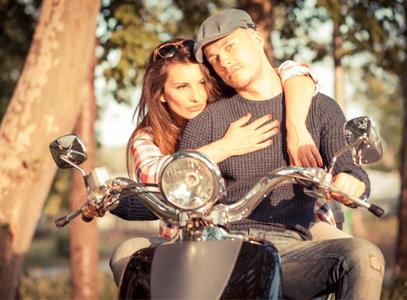 There’s just something about your “type” of man. You know that feeling when your heart beats fast and you can’t stop smiling. Don’t lie, if “Mr. Hot” comes along he’ll grab your attention. And if he does look your way, you’re going to look back. And before you know it, you fall for the wrong guy.

Someone’s going to bag that trophy and you are hoping it is you. And if you’re the girl with the lucky arrow that lands in his heart, you are not going to stop and calculate whether or not he is going to make a good husband or father. You’re not!!!

You know what you are going to say? Back off ladies he’s mine!

You’ve got him. He’s yours now and you are going to enjoy your trophy. For a while anyway.

Because you thought you had your perfect man but, in reality what you actually end up with is a statllion who is good for nothing but breeding and breaking your heart.

This does not make you bad. What it makes you is a bad decision maker.

Why do woman fall for the wrong guy, the men who aren’t good for them?

Because they let chemistry do the choosing instead of their brains.  And no I’m not judging because I’m guilty as charged.

What I’ve learned through my own trial and error and error and error is that chemistry is King when it comes to initial attraction. And it’s intoxicating. And interestingly, our beer goggles are unique to ourselves. We might see tall, handsome, loving and caring but our friends and family probably see narcissistic, selfish and down right bad relationship material.

But it doesn’t matter what anyone else sees because we’re love and chemistry is our guide! It’s lust! Whatever it really is it’s real to us. It’s fun. It’s exciting and it’s wonderful while it lasts. But it won’t last forever. The beer goggles break. The rose colored glasses crack. The light bulb comes on. We wake up one day and realize that the man we depend on and the father of our children is not “good for us.”

Now what are we going to do?

We can lie to ourselves and pretend it’s not true, and deny the reality of the situation.

We can do nothing. Just tolerate it and do our best to accept him as is.

Or, we can make a change.

I don’t mean him. I mean us. I mean the situation. Take control and move on.

Don’t worry about what anyone thinks. You made a bad choice. It doesn’t make you bad. Forgive yourself, protect your children and try not to make the same mistake again. It’s difficult. You very well may make the same mistake again. We’re wired to fall in love. We can’t control chemistry. Many times what you think is love is just lust. Lust is natural but lust can be lethal.

I know there are theories about why women fall for the wrong guy. Some woman pick men that remind them of their fathers. They need to make up for shortcomings in that childhood relationship. They need things they didn’t get from daddy. So, they find a bad boy they think will take care of them.

For many of us though, it’s just plain chemistry. It’s unexplained excitement. It’s like a moth to a flame. And then we get burned.

This is my advise for women who fall for the wrong guy:

Spend some time alone. Get your act together. Enjoy your children. Provide for yourself. Mourn the loss of the fairytale ending that you aren’t going to have. Then start a new chapter.