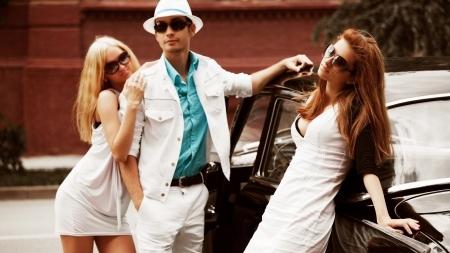 I can’t seem to stop worrying about my kids when they are at their Father’s house. He has always been a good father, during the marriage he put the kids first and seems to adore them. He does have a revolving door of girlfriends. I’ve lost count of the women the kids have met while with him since our divorce.

I think my worry stems from the fact that I don’t know these women. When I send the kids with him for visitation I never know who they are going to be around. We’ve had a civil divorce and the two of us are getting along great but I feel like I should talk to him about my concerns. On top of worrying about the many women he brings around the kids I also worry about bringing the concern up to him. I don’t want to rock the boat, to upset the harmony we have established since the divorce. How can I broach the subject with him without putting him on the defensive?

People have different dating styles and if you think back to your dating days I’m sure you’ll remember some of them. There are people who never seem to be without a partner with each relationship lasting for some time, there are those who are on their own for a period after the end of a relationship and don’t seem to date much before finding another relationship and there are people, like your ex who have a constant stream of dates but no one in particular.

I think it would be helpful if you considered what your dating style is and see if an inconsistency between your style and your ex’s style is what is making you uncomfortable. Just because it’s not the way you’re comfortable dating doesn’t make it wrong.

Another approach is to consider that when you date as a parent you have a golden opportunity to model positive dating behavior for your children and to show that dating is a normal part of life so there is no reason to compartmentalize your life like that. This may be particularly relevant if your kids are pre-teens or teens.

By seeing their father date lots of different people your kids may get to see that the early phase of dating is all about getting to know someone and if after a couple of dates you decide you don’t have much in common, then that’s OK. They may also get a sense that there’s no reason to be scared of asking someone on a date – some people will say yes, others will say no and that’s OK too. It’s what dating is about.

Your ex may have ‘family values’ as one if his top criteria for a long term partner. Having a date with him when his kids are with him allows him to see how his date interacts with children and what family values really mean to his date.

If your ex also talks to your children about the dates, why he isn’t seeing someone again or asking for their impressions, then that’s another opportunity for him to be modeling positive dating behavior. It’s also important that dad explain what having a girlfriend means to him, such as companionship, friendship, and to be very clear that his girlfriend is not a new mom. This would be particularly important with young children.

The harm comes when the adults are not behaving in an age-appropriate way when the children are around. I would be very concerned for example, if you said that a girlfriend typically stays over when your children are there. This would be sending a strong message about casual sex to your children which experts generally agree teens are not equipped to handle. And kids are not stupid … if the girlfriend is in dad’s bedroom, they know it’s not just friends.

Another area of harm is when the children become attached to the girlfriend and then she disappears. In some respects, if dad’s constant stream of girlfriends means your children don’t get attached that’s a positive. On the other hand though, if your children are coming home heartbroken because they didn’t get to see the girlfriend they really liked from their last visit, then that’s a real concern.

You’re right – you don’t know these women. There’s no avoiding that and you are going to have to accept it. You say that he’s always been a good father and you’ll have to trust his judgment with his dates. You can however have a conversation with him about what is in the children’s best interests.

That doesn’t mean you can challenge his dating style or that he chooses to introduce his dates to your children because it makes you uneasy or because it’s not the way you’re choosing to date. It does mean you can talk to him about not having his girlfriends stay over while the children are there and you could discuss at what point he would consider introducing you. Personally, I would want an introduction if she was driving my children around, taking care of them when they’re sick or a vacation is planned, for example.

And remember any parameters you ask your ex to agree to, he should expect the same from you.

One more thought, I’m guessing that some of your discomfort about talking to your ex about this is simply that it just feels weird talking to your former spouse about his dating life. It’s not a topic of conversation you’re used to having with him. In this case, you’ll feel more comfortable if you’ve practiced your conversation. So get together with a girlfriend, explain the situation to her and then ask her to pretend to be your ex and to play devil’s advocate. Ask her to react in different ways to your questions: angry, evasive, over-sharing, for example. This will help you figure out the best way to approach your conversation and how to handle his different responses.