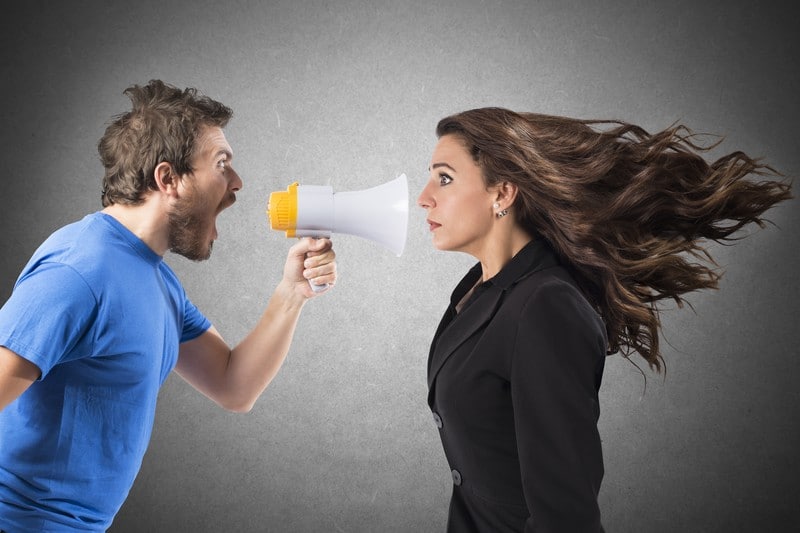 The trick to communicating with a high conflict ex is to give them as little ammunition as possible to use against you.

I remember sitting and staring at my computer screen. A knot in my stomach and terror over the idea of how to respond to my high conflict ex who seemed to want to create strife instead of resolve issues.

I could email him a brief email about one of our children and he would inevitably respond with anger. The subject of my email didn’t matter.

For example. He was taking our children to his father’s funeral out of state. I emailed him, expressed my condolences and asked if there was special clothing or other items he would need me to pack for them.

He responded with, “You’re a real piece of work. What mother doesn’t know what her children will need to attend a funeral? You’ve been to my parent’s home many times. You know the routine, figure it out for yourself bitch.”

I, of course, wanted to respond and tell him to go fuck himself but that would only have been giving him what he wanted…me on the defensive. Instead, I didn’t respond, packed their bags with what I thought they would need and, on their return received a nasty email about sending them with less than they needed.

When you’re co-parenting or doing business with a high conflict ex, you can’t win for losing.

Over time I developed email skills that helped lessen my anxiety over his correspondence to me and how I should or if I should respond.

Below are things I learned about corresponding with a high conflict ex.

These tips are based on a technique called “BIFF” created by Bill Eddy:

Us as few words as possible, one, at the most three paragraph consisting of no more than three or four sentences. The goal here is to give the high conflict ex fewer words to respond to. The more you say, the more likely you are to trigger the monster in him.

Provide him with the informative he needs without your opinion or any defensiveness. He doesn’t need to know what you think or how you feel about whatever information is being related to him. Expressing your feelings and opinions leaves you open for him to slam, demean or belittle you. Don’t give him the opportunity.

You may want to separate his head from his shoulders but put that aside and be friendly. If he has sent you the information you needed thank him for it. If nothing else, end your email with a “have a nice weekend, “or “take care.” The object here is to not be who he is. And, nothing shows someone more that you have detached from them and their drama than a friendly salutation.

If you know the issue being discussed requires a reply by him let him know when you expect to hear back and the actions you will take if you don’t hear back from him. For example, if your marital home is being sold and you need his signature on a document let him know the date you need it by and what steps you will take to resolve the issue if you don’t hear back from him. Don’t make threats, state how you will deal with it, and leave it in his hands to follow through. If he doesn’t, take your next step.

The steps I’ve described above won’t assuage your desire to lower the boom on him. It won’t give you a moment of satisfaction. It will, however, give you relief and teach him that he can’t push your buttons and the more you show him that, the less satisfaction he will receive from being an asshole to you.

A real-life email exchange between my high conflict ex and me.

Based on the recent order from the courts, the girls and I will be moving to Oregon on July 11th. Below you will find our new address and the names of the schools the girls will be attending. They are already registered in school and your name is with the school so that you have access to all their school grades and activities.

I will meet you halfway for your first weekend with them after the move on July 19th. If you need further information, I’m happy to provide it to you.

It’s just like you to use the courts to hurt me and separate me from the girls. There is nothing you won’t do to get your own way. You don’t care about the girls. You lied to the courts about a new job with a better salary. You are a contemptible woman and I can’t believe I wasted 9 years of my life trying to keep you happy.

As soon as I have enough money I’m going to appeal the judge’s decision and you’ll have to move back here. So, go ahead and move but don’t get too comfortable because you won’t be there long.

I’m sorry you are upset. I’ve provided you with the information you need to remain part of the girl’s lives. You will have as much time with them after the move that you do now. Like I said, please let me know if there is anything else you need to know.

What did I learn about communicating with my high conflict ex?

I learned what I’ve always known. My ex isn’t interested in civility or how his anger impacts our girls. I also learned that if I don’t give him ammunition to use against me, it shuts him down and gives him nothing to lash out at.

Give it a try in your own situation, see if it works.