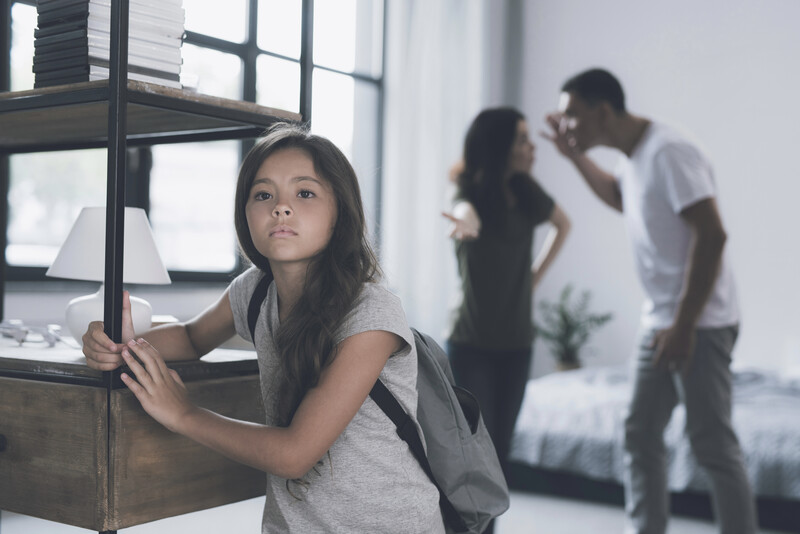 By far, this is one of the most commonly asked questions about divorce. The reason why this question is so difficult to answer is because every family is different and one size doesn’t fit all when it comes to divorce. Also, the degree of conflict in a marriage plays a large role in children’s divorce adjustment.

For the sake of the children

Whether parents should stay together for the sake of their children depends to a large degree on the level of stress and disruption in family relationships that often go along with an unhappy or conflictual marriage.

An important question is: would the well-being of your children be enhanced by my divorce? If the answer is yes, then a divorce can be advantageous. However, if divorce will expose your children to diminished resources, such as more conflict and more difficulty parenting, the answer may be to stay with your spouse – at least for the time-being (unless there is abuse).

How are you coping?

You’ll have a good gauge about whether your marriage is having a negative impact on your kids if you honestly answer this question: does my partner bring out my best self and are we good role-models for our children?

Divorce experts agree that a parent who has a reduced ability to cope with the stressors of life due to an abusive, extremely unhappy or high-conflict marriage, is not well-suited to be a competent parent. It’s obvious that a happy parent raises well-adjusted kids who thrive.

What is the level of conflict in your marriage?

Divorce researchers agree that the level of conflict among family members matters a great deal when it comes to looking at the adjustment of children. In her landmark book For Better or For Worse, Dr. E. Mavis Hetherington explains that while divorce might cause a huge disruption in the family – by two years later, stabilization and parenting skills have usually improved. It’s clear that conflict between parents, whether it occurs in an intact, divorced, or remarried family is associated with a wide range of negative effects for children that may be ongoing.

In her thirty years of research involving 1,400 families, Dr. Hetherington discovered that the type of conflict children experience matters. She notes that high-conflict that involves the child, is physically violent, threatening or abusive, and conflict in which the child feels caught in the middle, has the most adverse consequences for children.

Let’s face it, marital conflict can have negative consequences for children whether their parents are married or divorced. In a longitudinal study spanning over many years, renowned divorce researcher Paul Amato found that conflict in intact families was associated with emotional problems in children. Amato also points out that many of the problems children of divorce face begin during the pre-divorce period since it is a time of increased conflict for most parents. Thus, an increase in emotional problems experienced by children after divorce may well be due not only to dealing with their parents’ divorce but marital conflict that led up to it.

The main finding highlighted by Dr. Amato and Dr. Hetherington is this: while parental divorce may expose children to more risk factors for subsequent social and psychological problems, that association is moderate and the majority of youth (75%) reach adulthood as well-functioning individuals. Dr. Amato states “When parents engage in a pattern of chronic, overt, destructive conflict, children may be no worse off (and perhaps better off) if the marriage ends in divorce.”

Even the late divorce expert Judith Wallerstein who tended to emphasize the detrimental impact of parental divorce writes “Children raised in extremely unhappy homes or violent homes face misery in childhood and tragic consequences in adulthood.” She goes on to say, “I don’t know of any research, mine included, that says divorce is universally detrimental to children.”

Author Claudia Perez P.h.D. puts it this way: “The experience of home feeling safe, warm and nurturing is what every child wants and deserves, regardless of the configuration of today’s modern family. Being a party to continued direct or indirect fighting between parents, youngsters can become confused and nervous. They see television shows or look at picture books that portray happy families. When adults make nasty comments, are sarcastic or blaming, children wonder if they are the cause. Did I do something wrong? Was I bad? The negativity can be as subtle as eye rolling or the silent treatment or as overt as screaming or pushing…..kids know their parents are at odds. In the heat of the moment, mom or dad are often unaware that they are disrespecting their child.”

Here is a summary of findings regarding whether it is better for parents to stay in an unhappy marriage for the sake their children:

If you choose to stay in an unhappy marriage, it’s a good idea to seek counseling and resources for yourself and other family members. Take responsibility for your part in the conflict or dispute. One person’s ability to do this can change the dynamic of the relationship. Dr.’s Julie and John Gottman write: “one person’s response will literally change the brain waves of the other person.” Apologize to your partner when appropriate. This will validate their feelings and promote forgiveness and allow you both to move on.

Many factors determine whether or not unhappy parents should stay in a marriage for the sake of the children. Whether you decide to split or not, it’s wise to consider marriage counseling before you throw in the towel. If you choose to divorce, take comfort in the fact that most children of divorce are resilient and show good adjustment in the long run. With patience and hard work, some marriages improve over time – if both partners see themselves as part of a team, avoid blaming each other and cultivate an atmosphere of admiration, respect, and tolerance.

This blog was previously posted on HuffingtonPost.com