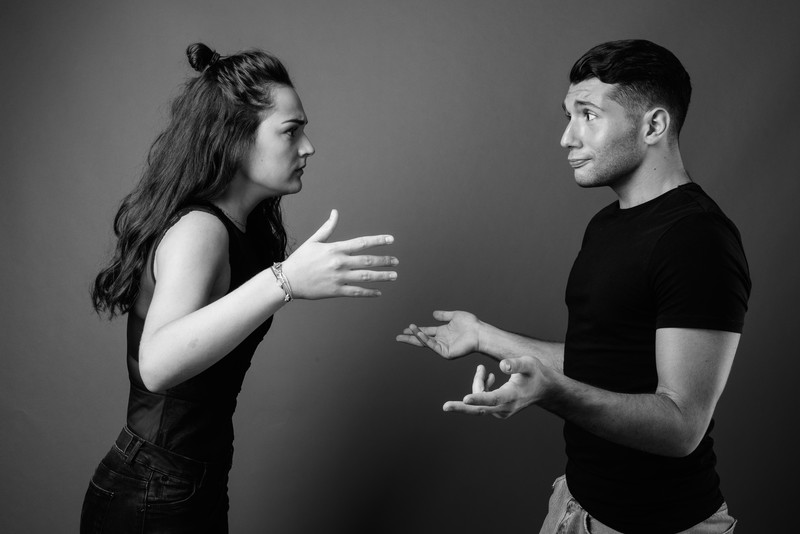 We’ve all been there: embroiled in an argument with our partner, caught up in emotion, and perhaps most crucially, unsure of how something seemingly small escalated. The touchy topic of who’s “right” and who’s “wrong” in a conflict between a couple often misses the point and prevents partners from moving beyond the spat in a constructive way that provides tools helpful in avoiding future quarrels.

For instance, Alyssa, 45, and Rick, 46, are caught up in an ongoing cycle of bickering about small matters that often escalates quickly into a full-blown argument. Recently, Alyssa noticed Rick’s credit card statement on his desk and saw a $125.00 charge at his favorite Bike shop. Without stopping to gather information, she accused him of being extravagant and he counter-attacked with blaming her for their financial problems because she reduced her hours at work to spend time with their two children. After calming down later that evening, she discovered that the bike shop charge was for their kids.

Avoiding Arguments With Your Partner

Stop Trying to Prove a Point and Make Repair Attempts

What Alyssa and Rick need is a way to stop blaming each other and to eliminate their pattern of trying to prove a point. They can benefit by developing a team approach to conflict resolution – realizing that working together is more important than being right. When each partner asserts his or her position and differences are addressed, a resolution is possible, and a partnership is formed. What matters is preserving love and attachment and getting back on track after a dispute.

In The Seven Principles for Making Marriage Work, Dr. Gottman describes repair attempts as the secret weapon that emotionally intelligent couples’ employ that allows their marriage to flourish rather than flounder. A repair attempt is any statement or action – verbal, physical, or otherwise – intended to diffuse negativity and keep a conflict from escalating.

In over 40 years of research in his classic “Love Lab” studies, Dr.  John Gottman discovered that the number one solution to marital problems is to get good at repair skills. He explains that repair attempts allow a couple to get back on track after a fight and are an important way to avoid resentment.

In the beginning of their relationship, Alyssa and Rick were so elated to have discovered each other that they focused more on their similarities than differences. After a while, emotional baggage from past relationships was causing them to overreact to triggers (such as spending money) and they started becoming more critical and defensive with each other. They lost sight of the loving feelings that brought them together in the first place.

Alyssa put it like this: “We tend to get irrational and dig our heels in when we fight – making things worse. Rick would say, “You’re always right Alyssa, you know you’re always right.” Alyssa paused and continued, “This would infuriate me even more. So now I say “I don’t want to always be right, I want you to understand where I’m coming from. And if that means we can’t talk about this right now, I’m going to go in the other room and read until we cool off.”

Rick explains: “Usually one of us will say “I love you and I want to get though whatever we don’t understand. Can we be friends? That’s what gets us through our fights, we are best friends.”

Keep in mind that when trivial issues are blown out of proportion, you should suspect “Hidden Issues.” For instance, the argument about money between Alyssa and Rick earlier isn’t really about the bike shop purchase as it’s about power and control in the family. Further, when people don’t feel recognized for what they have to contribute and safe enough to express negative feelings, they might blow up a trivial issue such as leaving dishes in the sink.

In Fighting for Your Marriage, D. Howard J. Markman Ph.D. explains that “Hidden Issues” are a sign that couples are keeping score, don’t feel recognized, and aren’t working as teammates. He explains that “Hidden Issues” reflect the unexpressed expectations, needs, and feelings that, if not attended to, can cause great damage to your marriage. Markman believes that most couples deal with issues only in the context of events. In other words, the only time an issue gets attention is when they are fighting about it.

Patterns that Can Erode the Quality of Your Relationship

Happily married couples battle against negative patterns of relating rather than battle against each other, according to Howard Markman Ph.D.  In fact, he advises couples to be watchful of the four patterns that can erode the quality of a relationship: escalation, invalidation, negative interpretations, and withdrawal and avoidance.

Every relationship has its inevitable difficulties, and conflict goes with the territory. Sometimes couples avoid conflict because it signified the end of a former relationship, or led to bitter disputes that never got resolved. Avoiding conflict backfires in intimate relationships. Bottling up negative thoughts and feelings doesn’t give your partner a chance to change their behavior. However, one of the secrets of a good marriage is learning to choose battles wisely and to distinguish between petty issues and truly important ones.

For example, Rick learned that arguing over dishes left in the sink was hardly worth the battle. Rather than keeping score, he and Alyssa sat down with their kids and discussed a schedule for chores and family responsibilities. Rick and Alyssa were surprised that their children bought into the plan as long as they could take Friday off and have pizza delivery with their friends. Rick and Alyssa found out that their new approach to avoiding arguments and making repair attempts was a win-win for their entire family!

How should couples avoid conversations from turning into arguments?

Couples can develop a team approach to avoid conversations from turning into arguments. Team approach requires working together instead of always trying to win an argument. Moreover, couples should avoid indulging in blame games and understand their relationship is far too important than trying to prove a point in a conversation.

How should couples avoid disputes and form partnerships?

When each partner asserts his or her position and differences are addressed, a resolution is possible, and a partnership is formed. What matters is preserving love and attachment and getting back on track after a dispute.

How should a couple repair its relationship to save marriage?

Do couples argue because of emotional baggage from the past?

Emotional baggage from the past makes couples engage in arguments. Therefore, it’s essential for couples to communicate, arrive at a consensus instead of trying to win a point, and understand the importance of maintaining their relationships. When couples brush unresolved issues under the carpet instead of resolving them, they create trigger points that churn out unnecessary arguments over trivial matters.

Why do couples argue over money?

Couples will argue over money when their financial situation needs a lot of improvement. In such a situation, a partner may feel he or she is being criticized instead of being appreciated for making contributions. Arguments over money in essence is an exercise for gaining power and control in a relationship.

How do couples keep their relationships happy and healthy?

The secret to keeping relationships happy and healthy lies in waging a war against negative patterns of relating to each other instead of engaging in destructive struggles to win against each other through bitter arguments. Experts say couples should avoid escalation, invalidation, negative interpretations, and withdrawal and avoidance.

How to defuse an explosive argument between couples?

One the partners would have to step back when he or she feels that their buttons are being pushed in order to defuse an explosive argument. Explosive arguments between couples usually end when one of the partners either backs off or says something to break the negative cycle.

Avoiding conflict backfires in intimate relationships. Bottling up negative thoughts and feelings doesn’t give your partner a chance to change their behavior. However, one of the secrets of a good marriage is learning to choose battles wisely and to distinguish between petty issues and truly important ones.

Am I Doomed To Repeat Patterns of the Past?