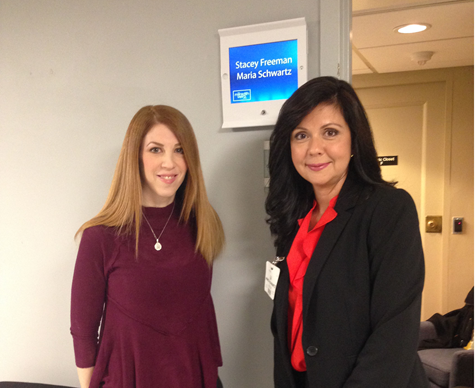 Two DivorcedMoms.com writers were given the opportunity to speak out and about their experience with divorce on The Meredith Vieira Show. The experience was unique for both.

See below for their take on their turn on national television. And, watch the video where they discuss Bravo’s new scripted sitcom Girlfriend’s Guide to Divorce. Nothing quite heralds the first time you feel you’ve “arrived” as seeing your name on a screen outside a green room-not just any green room, but one for The Meredith Vieira Show. As a woman, like so many, who spends most of her time reflecting on her failures rather than her accomplishments, her imperfections more than her talents, and quieting her inner critic who keeps asking her how on earth she got to this literal “top” of “The Rock,” I was both humbled and awakened by the incredible sense of pride and gratitude I felt that day.

The “would you like to appear on television” opportunity is one of those moments when all at once you are living your dream and dreading a nightmare. On the one hand I felt perfectly suited for the part; after all, I am a divorced, divorce attorney so who more than me could possibly understand the trials, tribulations and reality of divorce? On the other hand, representing an entire community of women on national television to comment on a topic so dear to my heart suddenly left me wondering how I could sum up the issues we face in just a handful of sentences AND do so in a way that was coherent, meaningful and impactful. In other words, not mess up.

Enter, The Meredith Vieira Team, in particular two young women who were confident, enthusiastic, smart and incredibly supportive. Their confidence was contagious! Within moments I was ushered off to “hair and makeup” where I got so caught up in the fun of it all that I forgot that I was just minutes away from the audience, cameras, and Meredith Vieira herself. When Meredith appeared, we all jumped to our feet. She had incredible grace and energy.

When she got to the topic of divorce she spoke in a way that was incredibly empathic. As my turn neared, I flashed back to the first time I jumped off a diving board. My heart was racing, but I was excited. With each step I took, I knew the edge got closer and before I knew it, I felt the splash and was rising again.

I felt incredibly proud to be a woman that day. I felt overjoyed to be in the company and comfort of other women. I felt honored for the opportunity and grateful that a woman of such influence would spotlight our issue, the life of a divorced woman. It is not an easy life, but certainly one worthy of acknowledgment and support. I was honored to speak on The Meredith Vieira Show last week with fellow writer, Maria Schwartz, Esq., about women’s empowerment after divorce. Not only is it a topic about which I am passionate, but it is also one that is near and dear to my heart.

Following my separation three years ago, I was faced like so many women are with the daunting prospect of rebuilding my life as a newly single woman. For those who are first embarking on this long journey, know that although there will be many difficult moments, there will also be those that tell of our bright future and the strength and potential we each have within us.

For me, my appearance on the show marked one of those moments. Thank you to Laura Peck and Cathy Meyer for allowing me to partake in this wonderful opportunity and share my personal divorce experience with others.