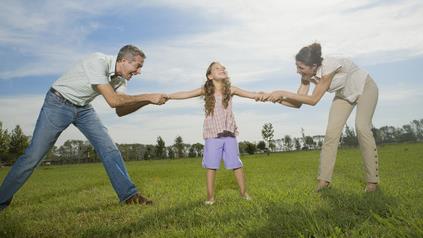 What Shared Custody Really Is

There are two aspects to custody: legal custody (which is your right to make important parenting decisions regarding your kids) and physical or residential custody (which where your child lives and spends his/her time.) “Shared” custody typically refers to physical custody: it means that two parents share approximately equal time with their child. Put another way, it means that a child spends roughly equal amounts of time living with each parent.

Is Shared Custody in Your Child’s Best Interest?

Here are 5 reasons shared custody might not be in your child’s best interest.

Bouncing from one home to another can be extremely disruptive, especially for very small kids. Infants, toddlers, and even young children, who shuffle back and forth between their parents’ houses often have no real sense of “home.” They often have difficulty adjusting to shared custody, and may feel like they have “Mom’s house,” and “Dad’s house,” but no home of their own.

It forces them to keep track of everything they own all the time. Trust me, that never happens. Inevitably, your kids are going to leave their favorite shirt, or their soccer shoes, or their homework at their other parent’s house when they want or need it. Unless you have enough money to buy your kids two sets of everything, you better be prepared to make a lot of last minute runs to your ex’s house to pick up what your kids forgot.

3. Unless You and Your Ex Live Very Close to Each Other, Your Children are Going to Spend a Lot of Time in the Car.

Commuting is not fun for anyone. Its even less fun when you are a child and have absolutely no voice in the matter. Having to constantly travel back and forth between two homes (especially if you are doing it every couple of days) wastes an enormous amount of time and energy. 4. If 50/50 Parenting Time Just Means Your Kid Spends More Time in Day Care and Less Time With a Parent, That Doesn’t Make Sense.

If one parent has a crazy work schedule, but wants equal parenting time, what really happens is that the kids end up spending a good portion of their scheduled “parenting time” in daycare, after school care or with babysitters, rather than with their other parent. Having “shared custody” in this situation is clearly not about trying to do what is best for the kids. Shared custody only works if both parents actually spend their parenting time with their kids.

5. If Parents Don’t Get Along, Shared Custody is a Nightmare.

Studies have repeatedly shown that the one thing that damages children the most is conflict. If you and your ex are constantly fighting, and can not agree on anything, then trying to equally share parenting time, decisions, and responsibilities is going to do nothing more than throw everyone into never-ending battle. It will be exhausting, stressful, and destructive.

Is Shared Custody a Bad Idea?

Again, the answer to this question is: it depends! Study after study shows that children do best when both parents are involved in their lives. Studies also show that the amount of time children spend with a parent affects the quality of the child’s relationship with that parent. So, even though spending equal time with each parent may be stressful, difficult, and expensive, if it means that your child will have a deeper bond with both parents, and will be happier, more well-adjusted, and more successful in life in the long run, then sharing custody makes all the sense in the world.

But, there is one HUGE problem with this entire discussion.

The Truth About Shared Custody

“Custody,” whether you’re talking about shared custody, joint custody, sole custody, physical custody or anything else, is more of a discussion about the PARENTS than it is about the CHILDREN.

What is in the best interest of your children? Here is the truth: I don’t know! And neither does your lawyer, or the judge, or your friendly state legislator! Oh, we all probably have an opinion about it. But who is to say that our opinion is right?

If you want to know the truth about shared custody, the one single truth that I know for sure, it is this: Every case is different. Every child is different. Every family is different. Shared parenting time may allow one child to flourish and cause another child to flounder. Armed with the best intentions, and the latest research, the “officials” involved in your divorce case may end up doing things that are not even close to being in your children’s best interest.

What’s the best solution? Make the decision yourself. Listen to your children. Focus on your children. Put your own ego aside. Talk to your ex. (Yes, I understand that this one is hard. But doing the hard things is what being a good parent is really about!) Be willing to make mistakes, and then to do things differently. Maybe shared custody will work great for your kids. Maybe it won’t. Maybe it won’t work now, but may work when your kids get older. Who knows? The truth is, you probably won’t know either until you try.

For more divorce advice and information from Karen Covy go to http://karencovy.com.

What is shared custody?

Is shared custody in your child’s best interest?

Children often have a hard time developing a sense of home when they shuttle between their parents’ residences. It’s emotionally unsettling for children when they can’t identify their own home while visiting their mom’s house and dad’s house.

Is it easy to manage children in shared custody?

It’s easier said than done when you try to manage children in shared custody. Unless you have two sets of everything for your children, you would be shuttling between your and your ex’s house to pick up what your children forgot. The homework for school, a pair of favorite shoes or jeans—the stuff your children need at all times—can’t be left at the other parent’s house.  Like it or not, it’s a time consuming exercise for everyone involved.

What happens if my ex doesn’t have time for shared custody?

It’s important for parents to spend their allocated parenting time with children when they have shared custody. If one parent has fought for equal time to satisfy his or her ego despite having a busy schedule, the children would have to spend their time at daycare or babysitters.

Will shared custody work if I have conflict with my ex?

You will end up damaging your children if you opt for shared custody knowing you have serious conflict with your ex. Conflict means your children would feel stranded when you litigate every other issue. It’s a recipe for disaster, stress and exhaustion for you and the children.

Shared custody does benefit children as indicated in several studies that children need both their parents for better upbringing, especially after divorce. The longer a child spends time with a parent, the better becomes his or her bond with that parent. Children will have better care, better skills and peace of mind when both parents spend equal parenting time irrespective of the cost and challenges involved.