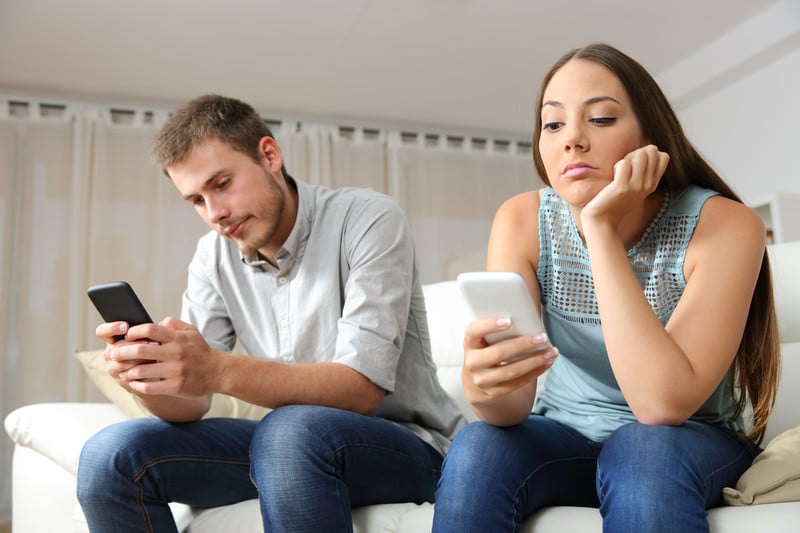 We all are more or less clear about the usual reasons for divorce, such as abusive relationship, sexual incompatibility, ideological differences, two-timing partner, and the like. However, what is unsettling is that many other reasons are getting added to them, making this sacred relationship increasingly tenuous.

One reason for divorce that is slowly emerging is technology.

Watching too much television or browsing the internet or even excessive texting is ruining marriages. This techno-fixation is forcing apart couples who have started preferring the company of their gadgets rather than their real-life partners.

W Brad Wilcox, editor of ‘State of Our Union’, mentions in an annual report on the state of marriage in America that “these techno-distractions are at least one factor in the disintegration of civic engagement, and as a result, in the quality and stability of marriages.”

However, the truth is that the rising divorce rates and deteriorating marital quality have many more reasons related to technology.

Let us see six major ways in which technology is affecting divorce rates:

1 Financial hardship due to the expense of tech gadgets.

The introduction of new phones and gadgets is making people spend on them at the expense of other essentials, thereby putting the family in financial dire straits. The problem is further aggravated by the spiraling prices of such gadgets that seriously hurt the pocketbook. If a partner feels that he or she must have a new phone and the other is saving for a critical household item, it usually results in a showdown which leads to strife in the marriage.

2 Obsession with social media distracts couples from each other.

Obsession with social media is on the rise. People with their noses buried in their mobile phones, tablets or laptops, either browsing Facebook news feed or following their idols on Instagram, present a ready recipe for divorce. Research undertaken by the University of Boston and Pontificia Universidad Católica de Chile found a direct correlation between per-capita Facebook accounts and divorce rates.

The more time spent on social media, the less time spent at work or with your partner. The younger age group is more addicted to the social media. According to Tara Yelman, a San Diego divorce lawyer, while women are the ones filing for divorce more often, 11.7 percent of men, aged 30 to 34, also file often. This is because young adults are more technologically savvy and find more comfort and happiness with their gadgets than in the company of their partners.

It is time people realized that happiness and contentment can only be attained by freeing themselves from the shackles of technology and restoring the lines of natural communication with their partners.

4 Technology becomes the primary focus, not the marriage or relationship.

A common scenario nowadays is to find couples spending entire days at the office in front of a computer and then returning home, and spending the entire evening interacting on the social media instead of with each other. According to a Nielsen company audience report, an office-bound adult spends an average of over 10 hours a day on the computer. This results in a breakdown in communication between couples and loss of the much-needed together time that strengthens marital bonds. In many cases, such lack of communication leads to divorce.

The invasion of technology has negatively impacted the age-old practice of spending quality time with a partner. Couples used to enjoy time together attending concerts, plays, shows and the like. They also called on others and went out socially. These interactions with partners and others made life interesting. With technology invading a couple’s social life, people have started finding happiness in their gadgets, thereby seriously jeopardizing their relationships. This lack of social life and selfish attainment of happiness through technology leads to partners being ignored, resulting in divorce.

With couples spending an average of 23 hours a week texting, according to ‘USA Today’ and ‘Business Insider’, it has become a complementary medium of communication between many couples. But, Ruth Rettie, a qualitative social researcher, states that ‘texters’ are more likely to feel lonely than ‘talkers’. While ‘texters’ are exchanging news, information and gossip only at a single level, ‘talkers’ are exchanging the same at a more elaborate level, body language and all, which makes for an enriching and satisfying experience. Therefore, ‘texters’ are more prone to divorce than their talking counterparts.

A 2008 British study found that 33 percent of people engage in the exchange of texts or emails with others, while in bed with partners. A study in Italy found that couples with television in their bedrooms had almost 50 percent less sex than those without. This increased disengagement from interpersonal activities between couples, according to Wilcox, leads to all sorts of relationship problems.

Humans are gregarious animals and cannot do without the company of other people. This is the reason why solitary confinement is deemed most severe than even rigorous imprisonment. It is time people realized that happiness and contentment can only be attained by freeing themselves from the shackles of technology and restoring the lines of natural communication with their partners.