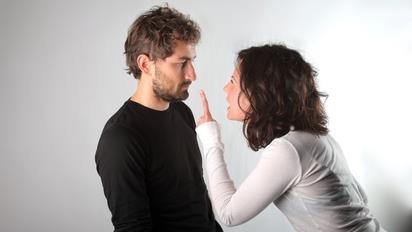 If there isn’t some jealousy, it’s not healthy.

If you don’t fight than there is no passion.

These are three phrases that should be immediately followed by three unicorns and that finger that resides between the pointer and index fingers.

Relationships take effort. But if we care for and want to be with the person on the other side, then it’s easy to put forth the effort. If we trust the person on the other side and they respect us, than jealousy should not rear its ugly head. And if we fight a lot, it’s a sign that we don’t have the respect and admiration for each other to find alternate means of dealing with differences and disagreements.

To take this point a couple steps further, let’s explore the basics of a successful relationship.

1. Awareness: As in, I know who you are and what moves you. I understand your body language and your words, even when you may not fully and succinctly lay out what you’re trying to say. I don’t need to ask you if you like something or if you had a good day because I’ll be in tune enough to understand these facets of you.

2. Unselfishness: As in, my awareness is followed up by actions and words without a desire or need to get something in return. It means that I will do things for you because I have genuine desire to do so.

3. Respect: As in, I respect who you are and what you bring to me and the relationship.

4. Admiration: As in, I can talk effortlessly about all of the good things about you and what makes you such an amazing person. I admire your strengths and your ability to see your faults as we all have them.

That light recap was important in establishing the basis for why a lot of fighting should not be attributed to mere passion in a relationship.

If we truly respect and admire our partner, we will not want to fight as a matter of sustaining our relationship. Something will trigger us to pull back those default negative emotions and move forward with a more thoughtful approach.

If we are truly aware of our partner, we will see things that give us concern and seek to understand those things before rendering a broad reaction to them. Shortly thereafter, aforementioned respect and admiration, along with unselfishness, will guide us down a path of thoughtful conversations and actions. This being wholly different than seeing things that give us concern and attacking or being passive (aggressive) about them.

To bring this all home, when people fight a lot, it is a result of impulse reactions that stem from unresolved issues or feelings of grander proportions. One fight with a significant other should give us pause and make us reflect on how it got to that point and what could have prevented it. In order for this to occur, however, we must think beyond ourselves (awareness and unselfishness) while having genuine respect and admiration for our partner. Those unresolved issues or feelings could be a lack of commitment to the relationship and thus an indifference to the end-state. It could also be a lack of respect for a partner or a self-esteem issue from the antagonistic partner that just likes to fight and be right. Either way, there is a compatibility issue afoot. Care to read the definition of incompatible? Unable to exist together in harmony. While two people that fight a lot may exist in the same space, it is not in harmony and it’s hardly together.

When someone tells you it’s all about passion, they are speaking of a partner’s passion for the subject but that is significantly different than their passion and commitment to the relationship as a whole.